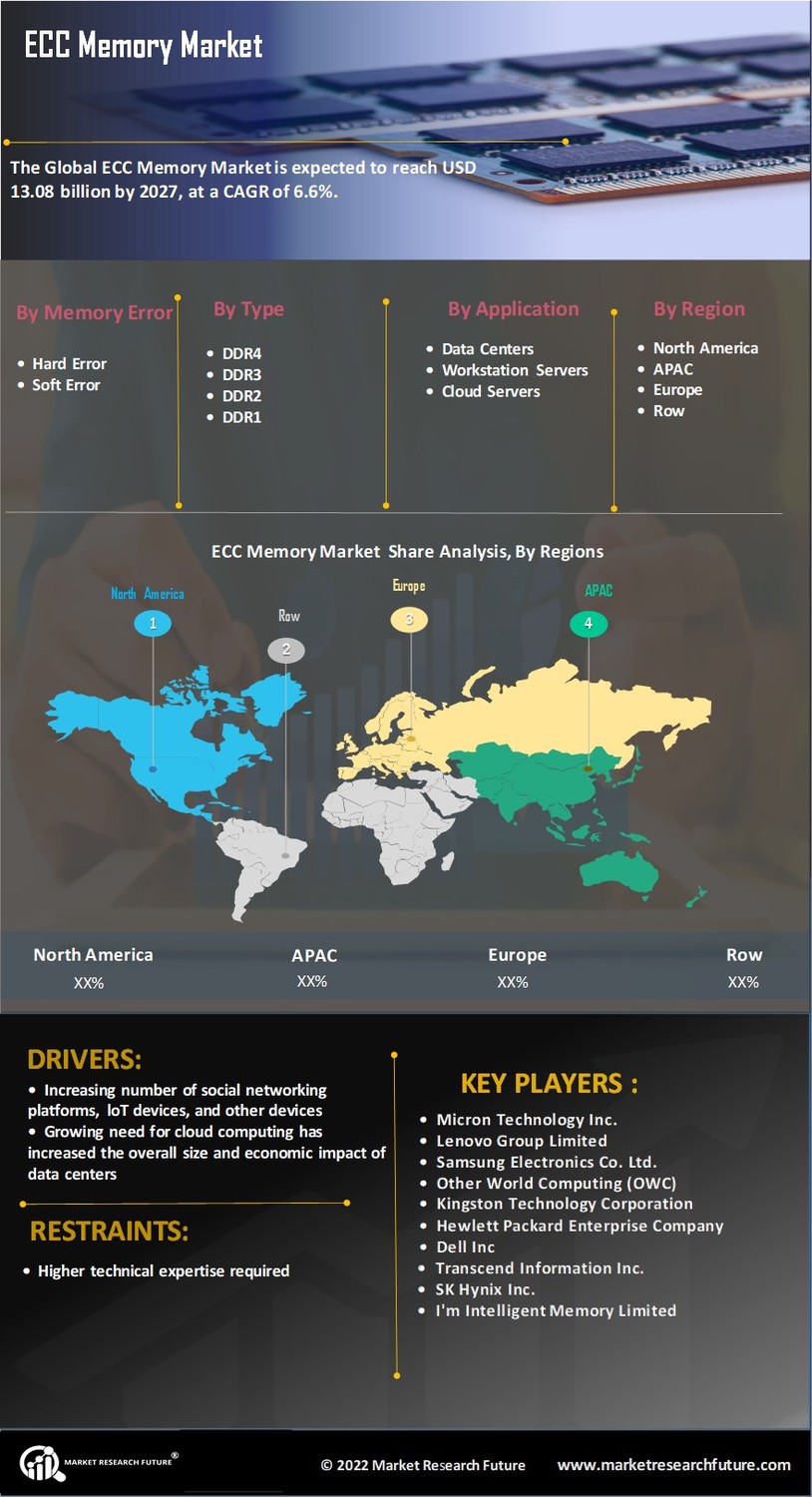 The Global ECC Memory Market Size was valued at USD 8.55 billion during the historic forecast period and the ECC Memory Market Share is expected to reach USD 13.08 billion by the end of the ECC Memory Market Analysis period at a CAGR of 6.6%. The error-correcting code (ECC) is a technique for detecting and fixing faults in single-bit memory. A hard error is usually caused by physical damage to the memory chips, such as temperature, voltage, or current changes. The increasing demand for ECC memory is directly related to the growing demand for big data, which places a strain on memory due to data compression. As a result, ECC memory helps to reduce data loss due to physical or data writing errors. ECC memory is most commonly used in DRAM and cache memory, where data is temporarily held. Some non-ECC memory can identify errors, but they are unable to rectify them. As a result, ECC memory is costly and essential for large-scale data transmission and storage applications including data centers, cloud servers, and workstations.

The COVID-19 outbreak is expected to have a substantial impact on storage devices, as China is one of the key suppliers of raw materials and completed goods. Production is being cut, the supply chain is being disrupted, and prices are fluctuating throughout the industry. In the following months, major electronic companies' revenues are projected to be impacted. In the short term, this would stifle the market's expansion, ECC Memory Market Opportunities, and ECC Memory Market Demand. The epidemic also hastened the emergence of telemedicine, forcing the medical/healthcare industry to ramp up efforts to meet demand and deal with overcrowding. This shifted the focus even more toward improving and streamlining telehealth capabilities. The ECC memory market is expected to develop significantly during the forecast period and change the ECC Memory Market Outlook, owing to rising ECC Memory Market Demand.

ECC Memory is intended to be more stable than regular RAM, and the failure records confirm this. Using ECC RAM, on the other hand, has a few drawbacks. The first and most obvious disadvantage is that ECC memory is not compatible with all computers. The majority of server and workstation motherboards require ECC RAM, whereas the majority of desktop systems will either not work with ECC RAM at all or will have the ECC feature deactivated.

Second, ECC RAM is more expensive than non-ECC RAM due to the additional memory chip and the intrinsically more sophisticated architecture of ECC RAM. The price varies, but depending on the size of the memory stick, you should anticipate paying about 10% to 20% more. The higher the price premium, the larger the stick.

ECC is also appropriate for latency-sensitive applications such as financial trading applications, analytics, applications leveraging direct-attached storage, and databases because of its ability to perform at near-memory speeds, as well as its ultra-high endurance and persistence through power outages. Thus, Technology has played a significant role in the market. Furthermore, during the projected period, technical developments for the implementation of ECC memory are expected to propel the ECC memory market forward.

Because of the presence of prominent players such as Micron Technology Inc, Intel Corporation, and Integrated Silicon Solution Inc, North America is a significant contributor to the growth of the ECC memory market. These firms are pioneers in memory and storage solutions, introducing disruptive technologies including artificial intelligence, machine learning, the Internet of Things, and self-driving cars. Furthermore, the growing use of high-end smartphones, as well as new technologies like machine learning and artificial intelligence, is pushing ECC memory demand across a variety of end-use applications. Cloud service companies such as Google and Amazon, on the other hand, use ECC memory and DRAM in their data centers to enhance scalability and improve memory capacity and correction coding for cloud computing applications.

The presence of multiple global vendors characterizes the global ECC memory industry. The fight for market share among the existing players is fierce. Cost, quality, accuracy, and product reliability are just a few of the elements that help suppliers stay afloat in a fiercely competitive industry. Because there are so many significant companies in the ECC Memory industry, there is a lot of competition. They have gained a competitive advantage over their competitors due to their capacity to continuously reinvent products by investing extensively in R&D. Based on their place of origin, presence, recent key innovations, product diversity, and industry experience, the key players in the ECC memory market are identified across all major regions. The major key players in the market are as follows:

The study includes thorough information on emerging trends, market drivers, development opportunities, and market restraints that have the potential to change the industry's market dynamics. It provides a detailed analysis of the market segments, which include various segments and subsegments. The Market research study includes a detailed analysis of the leading competitors as well as a strategic analysis for the future. Significant actors, large collaborations, mergers, and acquisitions, as well as trending innovation and corporate policies, are all examined in the study. The study provides a thorough evaluation of the market. It accomplishes this by giving detailed qualitative insights, historical data, and accurate market size estimates. The figures in the report are based on well-known research assumptions and methodologies. As a result, the research study serves as a clearinghouse for market analysis and data from all angles. The study also examines the maker's competitive environment. The report was prepared after a thorough investigation and assessment of every aspect of the market using data analysis to achieve exceptional market growth during the current forecast period, which will end in 2025. The key players in the ECC Memory Market have also been thoroughly discussed.

What are the key drivers behind the growth of the market during the assessment period?

The growth in data centers and servers are to drive the demand for ECC memory during the assessment period.

What has been historic valuation of the market?

What are the segments included in the segmental analysis of the market?

Memory error, type, application are the segments on which the market’s segmental analysis has been done.

Which regions have been included in the study of regional analysis of the market?

North America, Europe, Asia-Pacific, Middle East & Africa, and South America are the key regions included in the regional analysis of the market.

Which region has been the significant contributor to the growth of ECC memory market?

It is the North American region that has been a significant contributor to the growth of ECC memory market.