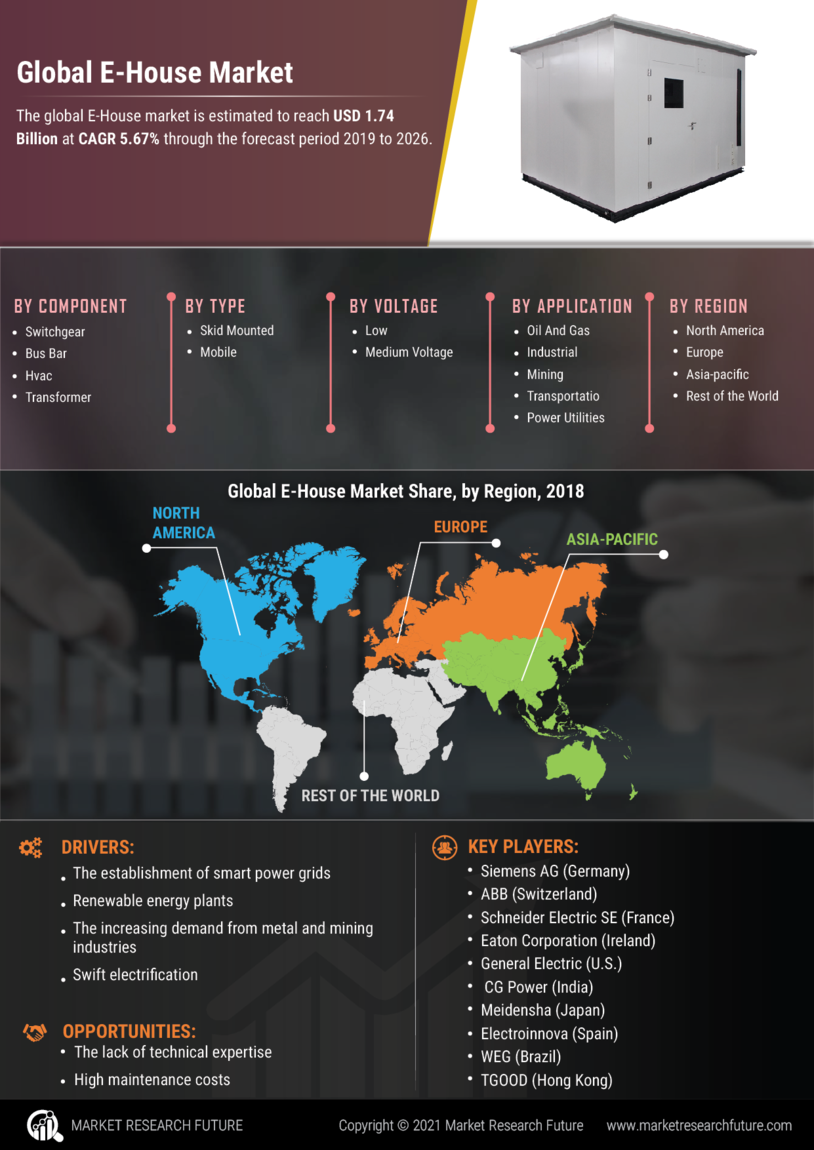 An E-House (Electrical House) provides electrical power to the facilities wherever it is required. In general, it is also referred to the compact power station which can be movable from one place to another. An E-House is equipped with several components such as monitoring and control systems, frequency drives and many other components. E-House benefits in reducing both capital and operational expenditures, time efficient and a one-stop solution for industries.

The E-House Market is driven by burgeoning demand from industries such as oil and Gas, mineral extractions and other commercial buildings. The establishment of smart power grids and renewable energy plants are fuelling the Market growth. However, the lack of technical expertise and high maintenance costs are hampering the Market growth.

The E-House market is studied for North America, Europe, Asia Pacific and Rest of the World which consists of Middle East and Africa. Middle East and Africa region holds the major market share and is expected to maintain the growth through the forecasted period. The increasing demand from metal and mining industries is driving the market in this region. Swift electrification in the Middle East and Africa is fuelling the E-House Market growth. Dubai alone consumes 37,000-gigawatt hours of electricity per annum, half of which, is used for commercial purposes and the other half for residential purposes. The increased power requirements in industries like oil and gas and metals are the major growth factors for the expansion of E-House Market in this region.

North America holds the second largest market share in E-House Market. The increasing power usage in metal extraction, data centres and other applications are driving the market for global E-House Market in this region. The rising investments in mobile power solutions are fuelling the market growth. Industries in Asia Pacific region are adopting mobile power solutions and is expected to show slow growth rate during the forecast period.

What would be the worth of the e-house market by 2030?

The e-house market worth would go up to USD 2.31 Billion.

What CAGR would the e-house market achieve during the forecast period?

The e-house market CAGR would be 6.3% during the forecast period.

Who are the eminent players involved in the e-house market?

Which region would continue the lead in the e-house market during the forecast period?

The e-house market will be dominated by the Middle East & Africa.

Which region has the second largest market?