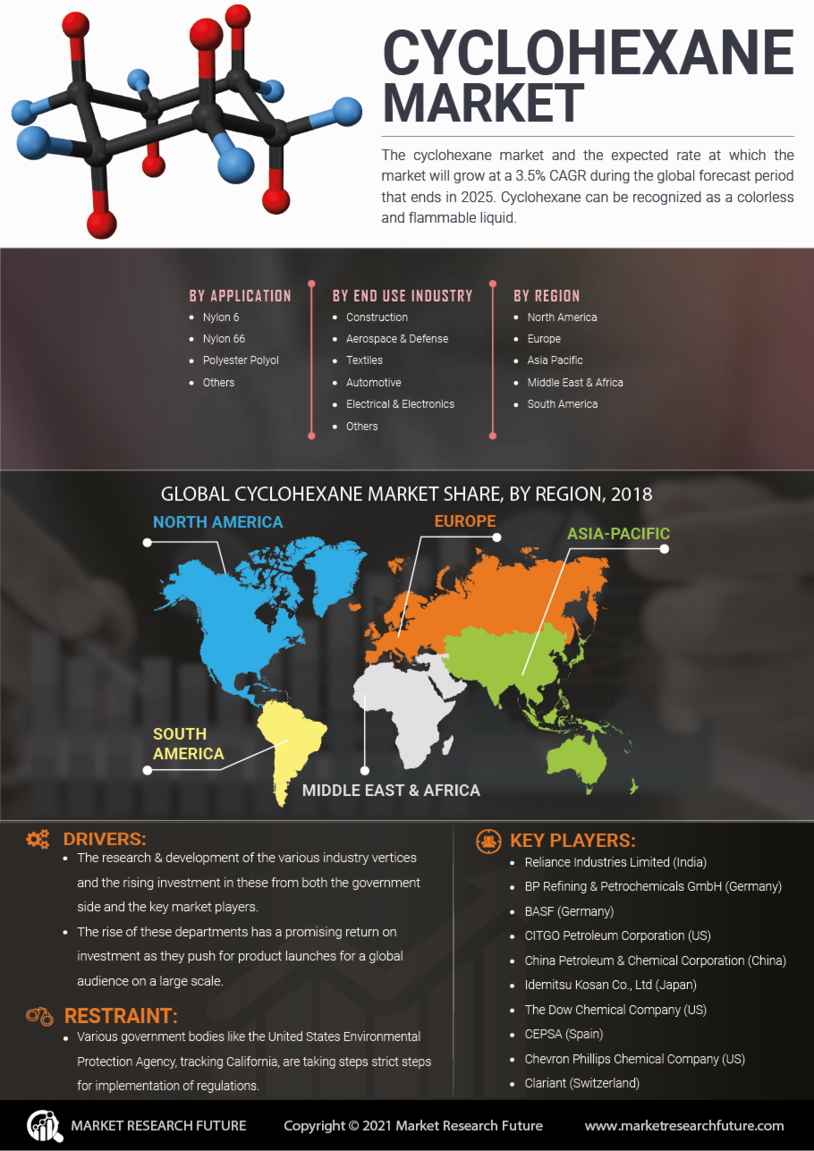 Cyclohexane Market and the expected rate at which the market will grow at a 3.6% CAGR during the global forecast period that ends in 2030.Cyclohexane can be recognized as a colorless and flammable liquid. This product lends its support for the large-scale production of catalytic hydrogenation of benzene. The main use of the product is in the production of caprolactam, and adipic acid. The materials are put to use for the production of a range of products like fibers, polyesters, thermoplastics, alongside plasticizers. Benzene has a strong application outlook and owing to the trend that inculcates this growing benzene application, especially in the form of feedstock, has a good return on investment prediction for the cyclohexane market size. Its assistance in the reproduction of chemicals is going to help the market and help the market size increase by the end of the forecast period in 2025.

Since the initial cases of the global coronavirus were reported, it was understood to be a regional problem. But, how it spread across the various world geographies, it was tagged as a pandemic by the WHO, and the cases and the fatality rate is increasing with each passing day. Amid the spread of the pandemic and its global scenario, the constriction and automotive sector were on an all-time low as the cyclohexane market operations and activities were undergoing temporary suspension. The imposition of functional restrictions and lockdowns of temporary and permanent nature has further lead to a decrease in the demand for cyclohexane alongside its derivatives. The names of these derivatives are nylon 6 alongside nylon 6,6 that form as ingredients to produce products like safety belts for passengers, carpeting fabric, ropes and hoses, auto parts made of plastic materials, amongst others. The global demand when the pandemic hit has reduced by a 15.8% rate and the market needs to develop and produce accordingly to cover these losses and initiate a progressive demand.

For the same, the government is rendering its support by allocating budgets in the research and development in collaboration with the prominent players of the cyclohexane market to opt for product development and launches to cater to the needs of the audience spread on a global scale during the forecast period that ends in 2025.

The research and development of the various industry vertices and the rising investment in these from both the government side and the key market players are one of the major driving forces for the market during the assessment period that ends in 2025. The rise of these departments has a promising return on investment as they push for product launches for a global audience on a large scale.

Various government bodies like the United States Environmental Protection Agency, tracking California, are taking steps strict steps for implementation of regulations. Also, these agencies and government bodies are taking rigid steps that are restricting cyclohexane use owing to the rising concerns related to air pollution that is a result of the process undertaken by the manufacturing industries.

The cyclohexane market analysis predicts an increased demand for the use of caprolactam and adipic acid across different verticles belonging to a huge range of markets, products, and services. Also, the market is witnessing a rise in the crude oil refining process during the assessment period. Further, the increase in automobile production and sales as an aim for the market will help it expand its way towards global growth. The global cyclohexane market is also gearing up for its towards catering to the increased demand for lightweight automotive spare parts and also nylon-based by the end of the forecast period that ends in 2025.

The cyclohexane market forecast helps in having an idea about the market insights and revenue models of the different segments that are functional in many regions across the globe. The market segments are based on the following:

The global cyclohexane market applications include nylon 6, nylon 66, and polyester polyol amongst the rest as per the global demand.

The products and services lent by the cyclohexane market are demanded by various sectors of different economies like defense, automobile, and automotive, electricals, electronic department, defense, and construction businesses.

The global market is functional in 5 major regions across the world namely North America and Latin America, the European nations, the APAC region, and the Middle East and Africa.

Owing to the market trends and key strategies taken up by the cyclohexane market players, the North American region is likely to witness huge growth during the forecast period ending in 2025. The region is home to the potential for high consumption, increased production capacities, alongside a rise in the economic growth rate of the region, as well. Amid the countries in this region, the US region is likely to experience the largest regional growth as the demand for cyclohexane is increasing at a large scale during the forecast period. Following the trend, Canada is also experiencing an increase in the value and volume for the demand for flexible foams used for manufacturing in the construction companies located in the region. Europe is also increasing its expenditure on automobiles which will help the region to grow moderately. However, Latin America and its related countries are expecting to witness a declined growth as the financial crisis and debt amount is rising and is crossing the income bars during the forecast period that will end in 2025.

The prominent cyclohexane market players are opting for key market strategies that will help to draw a competitive graph amongst the efforts of the functions across the globe. The key players are as follows:


October 2021- energy company BP and Lanxess have signed a strategic partnership agreement to use sustainable raw materials in engineering thermoplastics production. The former will offer sustainably manufactured cyclohexane to the Lanxess manufacturing site in Antwerp, Belgium, beginning in the last quarter of 2021. Lanxess utilizes cyclohexane as a precursor in manufacturing high-performance nylon 6 resins and compounds, utilized mainly in the automotive industry and in the consumer goods and electrical industries.The sustainable basis of the raw materials is approved as per the ISCC Plus rules. April 2021- Sabic, Saudi Arabia's state-controlled petrochemicals producer, has taken responsibility for the marketing and the sale of most of Saudi Aramco's petrochemicals and polymer products, formally being the chemicals arm of the oil giant. Aramco will also hand over responsibilities for its Malaysia-based Pengerang Petrochemical Company, South Korea-based S-Oil, and Saudi-based Sadara forms a joint-venture to Sabic. The latest PRefChem facility in Malaysia will have a capacity to manufacture 900,000 t/yr of polypropylene (PP) and 750,000 t/yr of polyethylene (PE) once it comes on stream later this year, as S-Oil functions a 405,000 t/yr PP unit in South Korea. More than 50% of the adipic acid is being employed for the production of nylon six by the key market players that are functioning majorly in the North American region. Also, caprolactam is being employed for the manufacture of nylon 66 materials. This will help the market reflect its growth and efforts on a global scale by the end of the assessment period.Cyclohexane is produced and developed through the hydrogenation process of benzene. Owing to a vibrant demand which is pushing for mass production, the benzene market is on a way of expansion that will have a positive impact on the cyclohexane market, its segments, and the overall market. The growth rate of benzene for the current period stands at 4.5% which will positively impact this market as well.The India Brand Equity Foundation (IBEF), the Indian Government, is an industry indulged in the construction work in India and is taking steps to cater to the field-related demand of various customers and industries spread across various regions in the globe. If the industry functions as per the expectation, the growth rate stands at 10.5% and the industry will reach a global valuation of more than USD 215 billion.Financial institutions and governmental agencies are increasing their investments and owing to the same, the Building and Construction Authority of Singapore announced its expectation of growth and reaching a market valuation worth USD 23.48 billion during the ongoing forecast period.

The report helps in presenting the cyclohexane market outlook based on which, the industry experts and key market leaders will predict the rate of growth of the market and final market valuation which further has an impact on the investment decisions and marketing strategies. The report helps with the market insights and also the way the market segments are catering to the global audience on a large scale. The report also talks about the market players, the degree of competition in them, and the recent developments undertaken by them during the forecast period which ends in 2025.

What is the expected rate at which the market will grow?

Which region is expected to have the largest market growth?

The US (North America) will have the largest market growth.

Is there any region that will experience declined growth?

Latin America is likely to experience declined growth during the period.