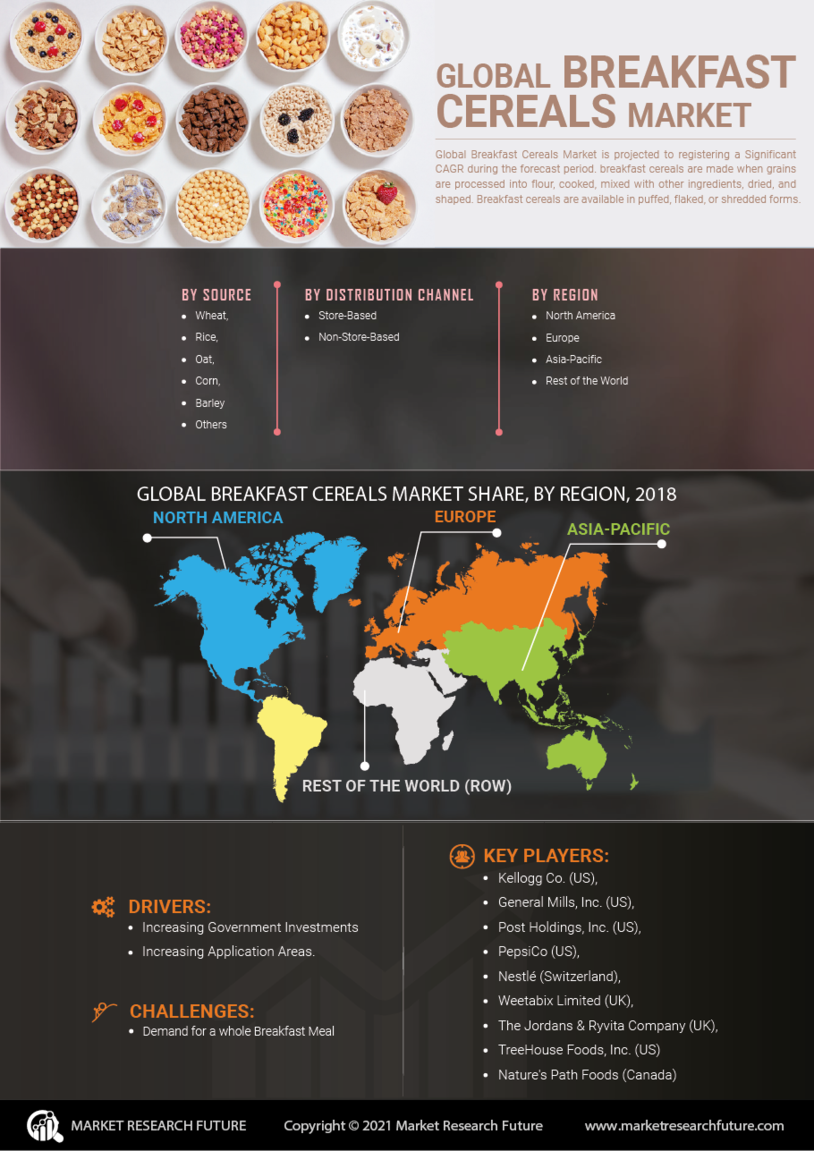 A good Breakfast Cereals Market analysis reveals certain key insights and trends. The size of the Global Breakfast Cereal Market, which was estimated at USD 91.7 billion in 2021, is anticipated to increase at a compound annual growth rate (CAGR) of 7.6% from 2022 to 2030 to reach 182.5 billion. Breakfast cereals have long been considered vital and staple food to consume mainly because of their high nutritional value and content. Most breakfast cereals have essential vitamins, minerals, and other nutrients added to them while being processed. These include fiber, iron, vitamin D, zinc, vitamin B, and calcium.

Breakfast cereals are highly valued by society because they are the first energy source most people have after they wake up in the morning. Indeed, it’s the energy and other nutrients from breakfast cereals that power and energizes people and helps them function until lunchtime.

COVID-19 was a novel virus that made its grand appearance during the spring of last year. The fact that it made many people around the world deathly ill and even caused some deaths signified to governments around the world that this was not a virus that was to be taken lightly.

Governments around the world responded by imposing national lockdowns and quarantines. Many businesses in many markets were forced to either halt operations completely or dramatically slow operations down at least temporarily. The result was disastrous for many markets. The breakfast cereals market was no exception. Many manufacturers found it difficult to source the raw materials needed to make many breakfast cereals. This resulted in a dramatic decrease in the supply of these cereals for the end consumer and even raised the retail price for them.

There are many factors that are driving growth in the breakfast cereals market. The main one is that people around the world are leading busier and busier lives. They don’t have the time to make big breakfasts. The other major factor that is driving growth is the fact that people are much better educated than their parents were. Therefore, they understand the importance of eating healthily in the morning. They are looking for a food that is easy to make and is a good source of nutrition. Breakfast cereals meet these two criteria.

Many manufacturers in the breakfast cereals market are seeing the potential lucrativeness of the market. They are seeing that most health-conscious consumers will gladly pay much more for cereals that have been fortified with nutrients. These manufacturers are responding by investing heavily in research and development. They are trying to make a new generation of healthier breakfast cereals. This has two consequences. It provides people with more energy and nutrition in the morning, and it allows the manufacturers to justify charging more for their finished goods.

There are some factors that are restricting breakfast cereals market growth. One is the fact that it’s still popular and customary for people who live in developing nations to consume traditional foods in the morning like congee or idli and sambhar.

Breakfast cereals manufacturers face a major challenge. That lies in producing better and more nutritious products with a longer shelf life that will still be reasonably affordable for the end consumer.

B&G Foods, Inc. is a major American player. It has managed to increase its profile in the breakfast cereals industry by investing heavily in research and development. Its hard work is paying off because it has formulated a new generation of breakfast cereals that last much longer and are much more nutritious than most breakfast cereals were even five years ago!

One such example is Cream of Wheat. This is a popular hot cereal that is more than one hundred years old. Thanks to recent advances in technology B&G Foods Inc has been able to make brands that are so nutritious that they are good to give to young infants and kids. Also, it is manufacturing various versions of these brands. These range from the traditional stove top cereals to ones that come in packets and even cups.

The breakfast cereals market can be classified into the following based on source:

The breakfast cereals market can be classified into the following based on packaging:

The breakfast cereals market can be classified into the following based on distribution channel:

The first type of distribution channel can be segmented further into the following categories:

Most breakfast cereals are sold in supermarkets

The breakfast cereals market can be divided into the following regions:

The people in the North American region are healthier in general because they eat more breakfast cereals. Research has shown that the nutrients in breakfast cereals strengthen the immune system. It also helps young people focus better because they get a nutritional and energy boost every morning.

The Asia-Pacific region will have the biggest breakfast cereals market growth of all of the regions in the world. What is causing this is the fact that the growing middle classes are increasingly acquiring Western tastes. This is especially true of the foods that they consume in the morning. They are also interested in eating healthier. This can be especially said of the middle classes in Asia’s two economic heavyweights - India and China!

The population in the Asia-Pacific region is growing exponentially as well. This is the case in India and China.

People around the world are gradually becoming wealthier and more health-conscious. They are increasingly preferring to consume healthy foods for breakfast. This breakfast cereal market trend is expected to be the norm and drives substantial growth in the rest of the world.

When companies invest in research and development, they are able to develop the technologies that will allow them to come up with safer and more nutritious foods that will last longer on shelves in various marketplaces.

Companies that enter into joint ventures increase their overall resource pools. It allows them to do better research and development easier and it also puts them in a position to enter into new markets easier. They also have the ability to consolidate their positions in existing markets.

The CAGR for the breakfast cereals market is 5%, It is expected to be the norm for the next few years. The region with the largest market share is the North American region The European Union and the Asia-Pacific regions have the largest market growth. There is respectable growth in the market because people around the world are increasingly Health-Conscious.

What are the major tailwinds pushing the growth of the global breakfast cereals market?

What are the key growth impeders of the global breakfast cereals market?

The presence of low-cost and counterfeit similar products is a key growth impeder of the global breakfast cereals market.

Which region holds the largest share in the global breakfast cereals industry?

North America holds the largest share in the global breakfast cereals market, followed by Europe and the Asia Pacific, respectively.

Who are the top players in the global breakfast cereals market?

What are the key growth strategies of players operating in the global breakfast cereals industry?

Strategic initiatives such as mergers & acquisitions, collaborations, expansion, and technology/ product launch are some of the growth strategies that players operating in the global breakfast cereals market adopt to gain a larger competitive advantage.

Breakfast Cereal Market are expected to be boosted by consumers' increasingly hectic lifestyles a...