Global Brain-Computer Interface Market valuation is projected to reach USD 4.97 billion by 2030, registering a 12.81% CAGR during the forecast period (2022-2030)
Request a Free Sample

The brain computer interface market size is projected to reach approximately USD 4.97 billion  by 2030, at a CAGR of 12.81% from 2022 to 2030. Without conventional cerebral pathways and muscles, a brain-computer interface is a communication and control system that translates human thoughts into interactions with the physical world. Without being constrained by physical restrictions, it enables direct human control of robots. BCI's primary goal is to restore or take the place of many valuable functions in persons with neuromuscular disabilities caused by diseases like amyotrophic lateral sclerosis, cerebral palsy, stroke, or spinal cord injury. Seven hundred million cases of mental and neurological disorders (MNDs) are reported each year, according to the World Health Organization (WHO), making up about 13% of all reported illnesses worldwide. There are 150 million people who experience depression, 25 million who experience schizophrenia, 38 million who have epilepsy, and 90 million who experience a substance use problem.

Due to lockdowns and disruptions in supply chain and production operations, COVID-19 had a substantial initial effect on the market. The COVID-19 epidemic, however, has accelerated the adoption of new technologies and increased end users' reliance on them. The growing use of brain-computer interface (BCI) technology for the treatment of numerous elderly patients with physical impairments, which enables them to improve their motor and cognitive abilities by translating specific signal features that reflect the elderly's intent into commands, can be used as a promising tool in rehabilitation medicine during COVID-19, is likely to have a positive effect on the market growth.COVID-19 has created a chance for the development and application of novel devices like BCIs, biomedical solutions, and assistive technologies (AT) to facilitate people with severe disabilities regarding their participation in daily life, according to the report "Motor-Imagery EEG-Based BCIs in Wheelchair Movement and Control: A Systematic Literature Review" published in September 2021.

The brain-computer interface market is growing quickly due to the increased utilization of brain-computer interfaces in the cosmetics, food, and pharmaceutical industries. The market shows immense growth potential as consumers become conscious of the benefits possessed by CBD products. The manufacturers are concentrating on formulating unique product offerings infused with CBD oil to give consumers comfortable access. For example, in February 2020, Colgate acquired Hello Product, LLC, to introduce a brand collection of CBD oral care. The company aims to deliver consumers a range of highly effective and nature-friendly products that enhances their everyday lives. Such factors are anticipated to increase the demand for CBD products during the forecast period.


The primary reason anticipated to propel the brain-computer interface market throughout the forecast period is. More than 930,000 Americans had Parkinson's disease in 2020, according to the Parkinson's Foundation. In addition, the foundation's as a result, most of these patients eventually need ongoing care, supervision, or assistance, which is made possible by using brain-computer interface equipment. Analysis forecast that by 2030, there will be 1.2 million people worldwide with Parkinson's disease. Parkinson's prevalence has been anticipated to have increased nearly 1.8 times since 2010, stressing the need for optimum care and treatment options for this patient population to lessen the financial strain on the healthcare system and reduce the cost of care for caregivers.


According to a survey by Gartner Inc. (Emerging Technology Roadmap for Large Enterprises, 2020), 64% of IT executives now consider skill shortages to be the main obstacle to adopting emerging technologies, up from 4% the year before.


By incorporating the BCI technology into Virtual Reality (VR) headsets and gaming material, the mobile & virtual gaming sectors are using it more frequently. Over 171 million people played VR games in 2018, according to data released by MyGaming. There were over 1.8 billion gamers overall. Mind-controlled headsets and other devices now have new applications thanks to virtual gaming, which is accelerating acceptance. The makers are concentrating on creating video games with BCI support. For instance, Valve intended to release video games with BCI technology in March 2019. Over the forecast period, these advancements are anticipated to fuel market expansion.

The brain computer interface market segmentation, based on components, is hardware and software. The hardware segment held a major share in 2021. the market is due to the rising use of BCI-related equipment and sensors in the digital sector. Most healthcare companies have started to adopt this technology to coordinate and integrate all healthcare procedures, including boosting the output of the medical personnel and improving patient inspection and care. Besides this, the software segment was the fastest growing segment due to increased end-user use of BCI software, which has help to ensure that BCI platforms and software operate as intended.

The brain computer interface market segmentation, based on the type, is non-invasive, invasive, and partially invasive. The non-invasive segment had a prominent share in 2021. due to the technology's broad applicability to goods like headphones, amplifiers, and gaming sticks, which contributes to the enormous income generating. Due to the less intrusive approach, this method is regarded as the safest, further fostering the segment's growth. However, the invasive was the fastest growing. The possibility of this technology restores eyesight by linking the brain to an external camera and gives functional mobility to paralyzed patients through brain-controlled robotic legs and arms.

The brain computer interface market research segmentation, by application, is communication & control, medical, gaming & virtual reality and smart home control. In 2021 the medical had a major share in the market due to the technology's wide range of applications in the treatment of sleep disorders, neurological conditions, people with paralysis, and neuroscience research. Additionally, the segment growth is further fueled by technical development and an increase in initiatives taken by the major industry players. However, smart home control was the fastest growing because there is more demand for a better way of life. People enjoy greater comfort and convenience thanks to smart home controls, from maintaining connectivity to running entertainment systems and appliances to monitoring security. The reasons above are anticipated throughout the projected period to fuel segment growth. 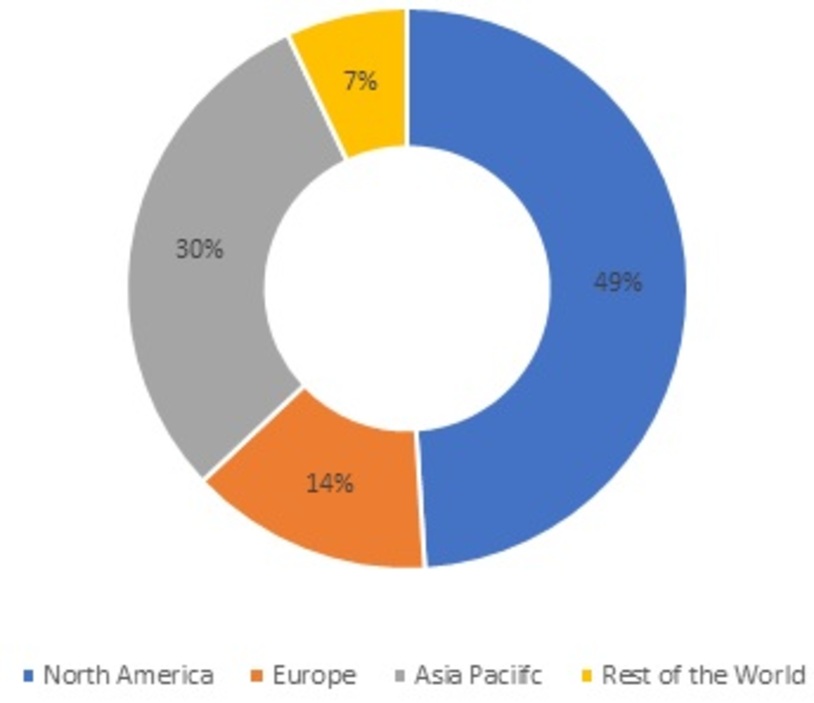 By region, the  brain computer interface market has been divided into North America, Europe, Asia-Pacific, and the Rest of the World. North America accounted for the most extensive market share. Asia-Pacific is projected to exhibit the highest CAGR during the review period.

North America was the most extensive  brain computer interface market share in 2021. Mainly because there are many clinical trials on brain devices here, along with considerable R&D expenditures. Additionally, it is projected that rising rates of neurological conditions including Parkinson's, Alzheimer's, and Huntington's disease in the area has spur market growth during the forecast period. Furthermore, it is projected that the rising demand for immersive gaming has inspire the development of new technologies like augmented brain-computer interfaces that would hasten the adoption of BCI technology in this field.

Asia-Pacific was anticipated to encounter the fastest growth rate in 2021. Technological developments in the market are projected to lead to the creation of improved solutions for patients and healthcare professionals. Significant untapped potential, rising healthcare expenses, and increased patient awareness are predicted to be the main factors driving the need for BCIs in this industry. The low-cost manufacturing facilities and beneficial tax rules of these countries have attracted foreign companies to this lucrative sector. In-depth R&D has led to the introduction of many unique products.

The market includes tier-1, tier-2, and local players. The participants are focusing their efforts on promoting R&D. Additionally, they embrace strategic growth activities to improve their market position and expand their consumer bases, such as product introduction, joint ventures, and partnerships. For instance, in October 2021, to enhance the development of its SaaS-based digital neurotherapeutics platform, MindMaze (Switzerland) invested USD 125 million. The money was supplied by AlbaCore Capital Group (UK), one of Europe's top specialist investors. Furthermore, in July 2021, A division of NIHON KOHDEN CORPORATION (US), Nihon Kohden Digital Health Solutions, Inc. (US), purchased 100% of Advanced Medical Predictive Devices, Diagnostics, and Displays, Inc. It is essential to develop software and algorithms that can forecast patient outcomes. This is driving the market for brain-computer interfaces ahead.

To identify and infer the drivers, restraints, opportunities, and challenges for the brain computer interface market

To provide a detailed insight into the major companies operating in the market. The profiling will include the financial health of the company past 2-3 years with segmental and regional revenue breakup, product offering, recent developments, SWOT analysis, and key strategies.

What is the growth rate of the brain computer interface market?

The brain computer interface market is growing at a CAGR of 12.81% over the next 10 years.

Which region has the largest share in the brain computer interface market?

Who are the key players in the brain computer interface market?

Brain Computer Interface Market is predicted to reach USD 4.97 billion at a CAGR of 12.81% during...