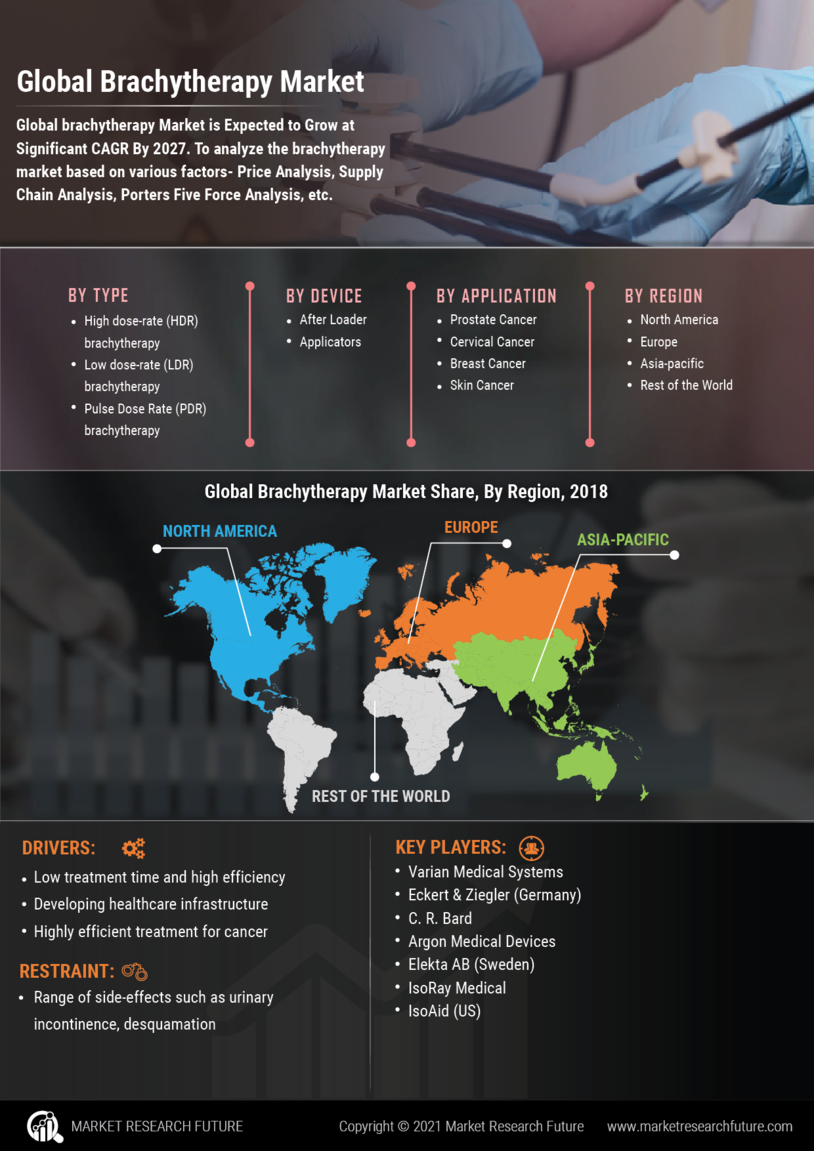 Brachytherapy market value is expected to expand at a CAGR of 7.9% during the ongoing forecast period of 2022-2030.

Brachytherapy is a treatment that involves injecting the patient with radioactive material. This particular form of radiation treatment is used to treat cancer. Internal radiation is another name for this. Compared to the traditional radiation treatment, which delivers radiation from a machine outside an individual's body, this enables doctors to administer larger doses of radiation to the targeted portions of the body. Brachytherapy often takes less time than external beam radiation to complete, and it may have fewer adverse effects. It can be used both alone and in conjunction with other cancer therapies.

The market is driven by factors like the increase in cancer cases that require brachytherapy, including prostate cancer, which would help the industry grow throughout the projected period. The market participants would be able to generate the most income in the following years, thanks to technological breakthroughs for cancer treatment.

Due to rising cancer rates and early acceptance of new technology, North America now controls the majority of the industry. Due to its large patient population and well-developed infrastructure, the United States controls most of the North American market. However, because of the presence of rising economies in this area and the growing awareness of improved treatment choices, Asia Pacific is anticipated to rise more quickly. Improved healthcare infrastructure in urban and rural regions is a primary goal for developing nations like China and India, which will benefit the region's total healthcare system.

The arrival of the pandemic has diverted the present skilled radiotherapy professionals towards treating patients who are covid positive. The patients are in distress and the situation is panicking. To help these patients, the government has increased its investment that will be helpful for the market players to increase their developments in the brachytherapy market and come up with global products to put the target audience that is patients in a better and secured place.

Based on the study formulated by the International Agency for Research on Cancer, the world is expecting a high prevalence of cancer. As per the formulated statistics, there will be an increase in the number of people having cancer globally and the number will reach several 24.6 million by the end of the future period, by 2030. This is expected to emerge as the largest factor that will help the market grow during the forecast period that ends in 2028.

But, on the way of its projected growth, the market is expected to witness certain restraints that will bar the market from growing at the expected rate. During the period, the market is likely to witness a lack of access to reliable technological advanced systems, especially in the developing regions. Also, there is a lack of professionals who possess the required degree of skilled radiotherapy, and hence, the brachytherapy market is likely to witness a slowdown in its growth period. The death rate in the low and middle incomes is low and only the radiotherapy needs of 3-4% of the total population are likely to be met.

There is a huge demand in developing and underdeveloped countries for the availability of skilled professionals in the medical field, especially radiotherapy skills. Hence, the advent of significant opportunities and investment for the market players will rise and provide the market with an enhanced base to work upon. The market players are soaring high by indulging in innovative and creative practices, alongside the new product developments that will help the market.

The brachytherapy market has been divided into the global market based on the type, device, application, and region.

Based on the Devices

The market has been divided all across the globe based on the devices into applicators and brachytherapy after loaders.

The second-largest market share all across the globe is held by the European region owing to the presence of well-established technologically advanced healthcare infrastructure that drives the market demand in this region. Moreover, the presence of countries like Germany, France, Italy, and the UK is another factor that drives the market demand. The increasing aged population is another contributing factor.

Being the fastest-growing region, the third-largest market share in the global market is held by the Asia-Pacific region owing to the presence of highly populous countries like India and China that drives the market demand in this region. Moreover, high per capita disposable income coupled with increasing expenditure on healthcare is another driving factor.

The Latin American region and the Middle East and African region hold the least market share due to the presence of low infrastructure in both these regions. Low per capita disposable income is another contributing factor that restricts the market growth in these regions.

The most prominent major key players in the brachytherapy market all across the globe are mentioned below:

These major key players use various policies to sustain their market position in the brachytherapy market in the global market by going for mergers, and acquisitions, by collaborating, setting up a new joint venture, establishing a partnership, developing a new product line, innovation in the existing product, developing a new production process, and many others to expand their customer base in the untapped market of the brachytherapy all across the globe.

The most popular kind of brachytherapy for breast cancer patients is intravitreal. This method involves implanting a radioactive device into the body and keeping it there while the patient receives therapy. The market for brachytherapy devices is expanding due to increased government initiatives to raise awareness and technical developments in minimally invasive surgery.

This research report consists of factors that drive the market demand in the global market along with the factors that restrict its growth in the global market. The technical analysis during the forecasted period is mentioned. The impact of COVID 19 on the brachytherapy market segments at various global locations has been discussed. The future growth rate in the brachytherapy market during the forecast period is highlighted.

At what CAGR is the brachytherapy market expected to grow over the forecast period?

Which region is predicted to command the highest share in the brachytherapy market?

North America is predicted to command the highest share in the brachytherapy market.

Who are the key competitors in the brachytherapy market?

What are the key factors driving the brachytherapy market growth?

What are the different applications of brachytherapy?

Its applications include skin cancer, breast cancer, cervical cancer, prostate cancer, among others.

Rising demand for cancer therapies worldwide is the result of the growth of Branchytherapy Market...