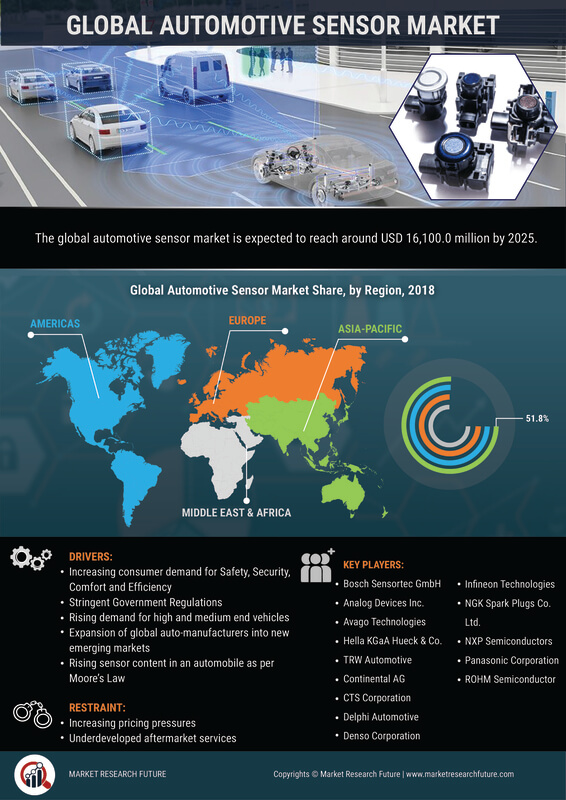 Automotive sensors market is estimated to grow at a CAGR of 2% over the forecast period.

Sensors tend to have enormous use in all automobiles, even in two-wheelers and lorries. The uses of sensors are found in wipers, dashboards, parking seats, tailgate alarms, and many more vehicles. With the increase in the popularity of vehicle automation and the increase in the demand for concept cars, the market has also been rising at a similar pace. According to various studies, almost 90% of the future cars will be based on automation. This will subsequently lead to the growth of the Market Size.

While the sensors are used to detect, record, and measure physical activities, responses are sent by transmitting the information. Thus, automotive sensors are a vital part of the vehicle system, detect, transmit, and analyze vehicle performance information internally and externally.

COVID-19 has brought some serious complications in the global market. The entire pandemic scenario has impacted the Automotive Sensors Industry in the forms of export of the Chinese parts, manufacturing interruption, and the closure of the plants where the assembly of the parts is done. Though, it is entirely dependent on the level and severity of the pandemic and the decision taken by the governments about the lockdown phase.

The pandemic has impacted collaborations, R&D, and even the partnerships in the market. The production of the vehicles is going to be largely affected due to decreased demand in the market. The increase in the demand for the new vehicles is most pandemic affected and has fewer chances of getting better any sooner. All these negative effects of the pandemic on the vehicle market directly affect the Automotive Sensors Market Outlook.

All these prominent players in the market have focused on bringing growth in the market by introducing the most recent technologies in the market. In addition, the collaborations, acquisitions, and mergers amongst themselves have been making the market even stronger. Also, all of these have been strategizing the plans and implementing them wisely in their work culture to bring the best out of themselves.

The global Automotive Sensors Market Size is expected to reach a market value of approximately 35 billion USD by the end of 2023. Also, the market is expecting a CAGR of approximately 7% during the upcoming forecast period.

Various factors have been bringing tremendous growth in the market. The rising disposable income of individuals, especially the middle-class population, is one of the major factors driving the Automotive Sensors Market Trends. While the companies offer different types of sensors, these perfectly designed sensors are useful in various applications like exhausting the temperature, measuring position, pressure, torque, and much more.

The rise in miniaturization in various regions across the globe has also been successful in taking the automotive sensor market to the heights of success.

The major restraint is the decrease in the demand for diesel vehicles. This is because diesel vehicles tend to produce more pollution as compared to other vehicles. Thus, while the deteriorating air quality and the taxation changes are the major factors of concern, the fall in the sales of diesel vehicles and subsequently decreased the new car registration the world over. All of this results in the hampering of the automotive sensor market.

The stringent rules and regulations due to the laws laid down by the governments seem to affect the Automotive Sensors Market Trends indirectly. The automotive sensor market is directly dependent on the automotive market. The increased demand for automotive vehicles automatically brings Market Growth. While stringent laws in the vehicle industry make sure that they take utmost care of the pollution element, diesel cars have been reduced in production. The aim to protect the environment and make it worth living has made governments follow such stringent policies, subsequently affecting the Market Revenue.

The automotive sensor market can be divided n to the following segments:

Based on the sensor type, the Automotive Sensors Industry can be segmented into the following:


Based on the technology, the market can further be segmented into the following:

Based on the vehicle types, the market can further be classified into the following:

The automotive sensor market is divided into the following based on regions.

The North American market is also expecting rapid growth in the automotive sensor market. This is attributed to the growth in the demand for automotive vehicles and the increased awareness about eco-friendly products.

Here is the list of the recent developments in the market:

The exclusive report prepared by the industry experts and the experienced professionals tends to make sure that the companies get every bit of knowledge and information required for the smooth functioning of the business. The report has the overview of the Automotive Sensors Market Value explained in detail, along with the market analysis based on the effects COVID-19 has brought on the market. It also has the market dynamics explained in detail, explaining the points like growth, drivers, and the Market Outlook factors.

The regulatory implications have also been explained in detail in the report. The market segmentation has also been discussed so that the companies get an idea about the market segments. The report also covers the regional analysis of the market and the major players that have been making the Market Value grow considerably; The recent developments in the market has also been discussed in detail in the report giving an idea about what's new in the market so that the latest innovations can be included in the working pattern and take maximum advantages of them.

What is the primary factor that has to bring enormous growth in the automotive sensor market?

The increase in disposable income levels is one of the primary factors that has been bringing considerable growth to the market.

Mention the names of the major players in the automotive sensor market?

What is the estimated CAGR of the automotive sensor market during the forecast period?

The estimated CAGR of the automotive sensor market is 7% during the upcoming forecast period.

What is the projected market valuation of the automotive sensor market?

The estimated market value of the automotive sensor market is USD 35 billion.

Which region across the globe is expected to witness the highest growth in the automotive sensor market?

The Asia Pacific is estimated to grow at the fastest pace in the automotive sensor market.