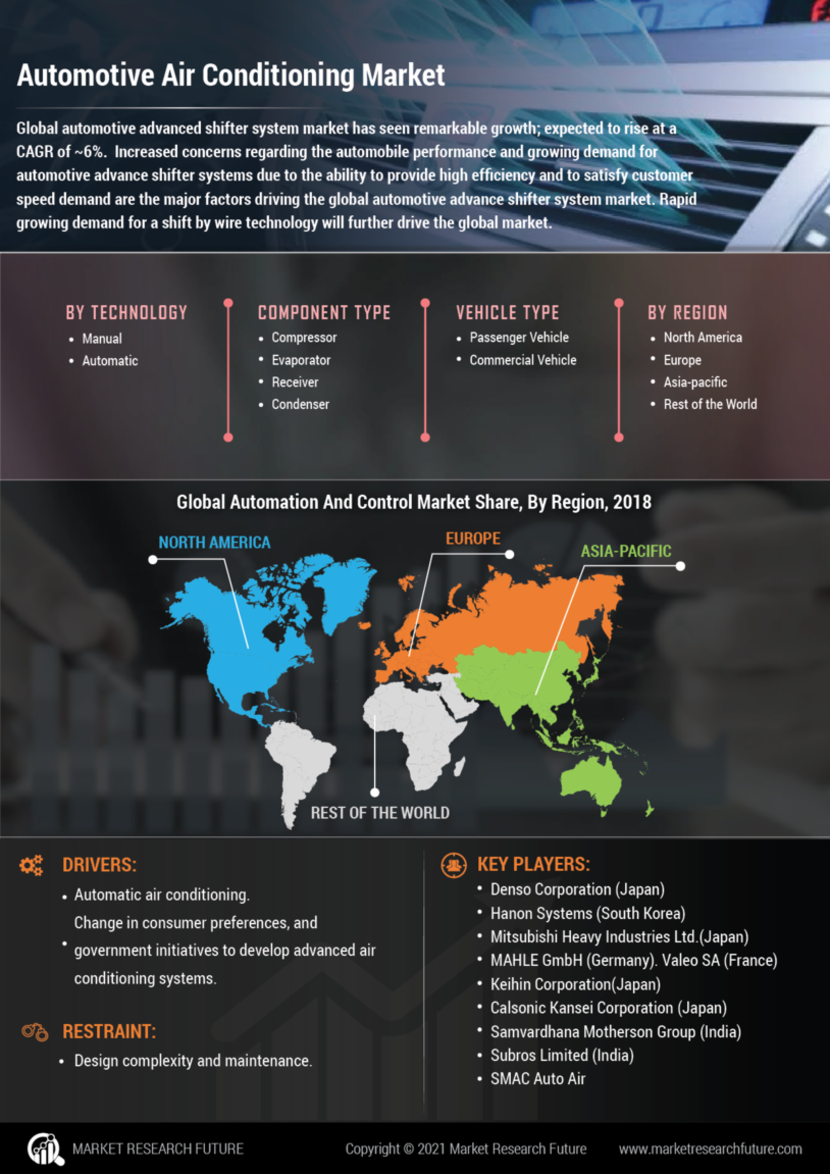 The factors that are responsible for the growth of automotive air conditioning market are surge in demand for passenger and commercial vehicles, change in consumer preferences, and government initiatives to develop advanced air conditioning systems. There has been an increase in the production of passenger and commercial vehicles over the past years in countries such as China, India, and Japan. The increase in production is majorly due to the availability of low-cost labor, which attract many automakers to set up their base in countries such as India, China, and Japan. According to OICA, the sales of new vehicles have increased from 2013 to 2016. In 2013, the number of vehicles sold were 85.6 million while in 2016, it was 93.8 million. The increase in sales of new vehicle will result in higher installation of air conditioning in the vehicles, which will drive the market. The gradual change in the consumer preference has played a major role in the growth of automotive air conditioning market. Over time, the stabilization of socio-economic conditions of individuals has led to gradually increasing disposable income. With the increase in the disposable income, consumers will move towards buying of advanced air conditioning system. Over time, consumers in the automotive industry focus on additional features such as climate control systems, pedestrian detection, and blind sport detection along with the aesthetic features of the vehicle. The advancement in the technology from manual air conditioning to automatic air conditioning will hence result in the growth of the market during the forecast period.

The automotive air conditioning market is segmented based on technology, component, and vehicle type. On the basis of technology, the market is segment into manual and automatic. The automatic technology is expected to dominate the market during the forecast period because it enables the occupants of a vehicle to set a specified temperature for one area within the automobile. The automatic air conditioning has the ability to monitor the temperature of a specified space without manual intervention. The mechanism of air conditioning system requires sensor that is placed within the system. These sensors read the current temperature of the area and matches the desire temperature defined by the occupant through the computer system within the vehicle. On the basis of component, the market is segmented into compressor, evaporator, receiver and condenser. Compressors, are expected to dominate the market during the forecast period as they perform major tasks such as heat transfer, absorbs heat, and condense excess heat, which enter the air conditioning. On the basis of vehicle type, the market is segmented into passenger car and commercial vehicle. Passenger car segment is expected to dominate the market during the forecast period due to the increase in the production and sales in Asia Pacific. The increase in the production of passenger cars will result in high installation of air conditioning systems in vehicles. The high installation will hence increase the sales and lead to the growth of the market in future. 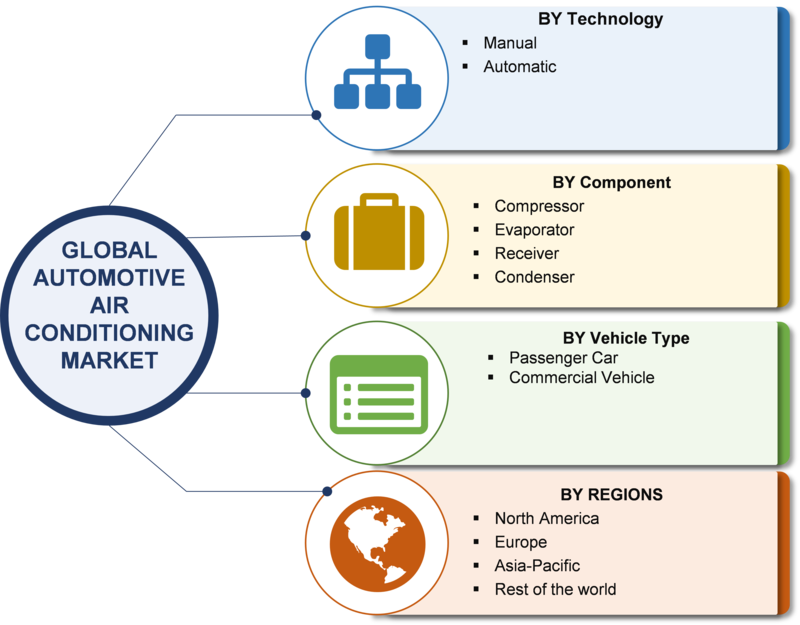 On the basis of region, the market is segmented into North America, Asia Pacific, Europe, and Rest of the World. Asia Pacific region is expected to dominate the market during the forecast period due to increasing population, rapid industrialization, and aggressive expansion of manufacturing sector. The automakers are moving towards technology-driven components, which will require less efforts by the consumer to operate. The development of technology-driven vehicles will result in increased adoption of automatic air conditioning in the vehicles. The increased adoption will drive the growth of the market in future. North America is expected to be the second largest market to grow during the forecast period.

The report for Global Automotive Air Conditioning Market of Market Research Future covers extensive primary research accompanied with the detailed analysis of qualitative and quantitative aspects by various industry experts, key opinion leaders to gain deeper insights into the market and industry performance. The report gives a clear picture of the current market scenario, which includes the historical and forecast market size in terms of value and volume, technological advancement, macro economical and governing factors in the market. The report provides detailed information about the strategies of the top companies in the industry. The report also gives a broad study of the different market segments and regions.

What are the main factors responsible for the market’s growth?

The factors that are liable for automotive air conditioning market's growth are surge in demand for passenger and commercial vehicles, various consumer preferences, and government initiatives to develop advanced air conditioning systems.

What are the segments involved in the market’s study?

The technology, component, and vehicle type are the segments involved in the market’s study.

What are the key regions profitable to the market?

North America, Asia Pacific, Europe are the key regions profitable to the market.

What are the key players investing in the market share?

Which region is going to lead the market in the present time?

Asia Pacific region is going lead the market in the present time.