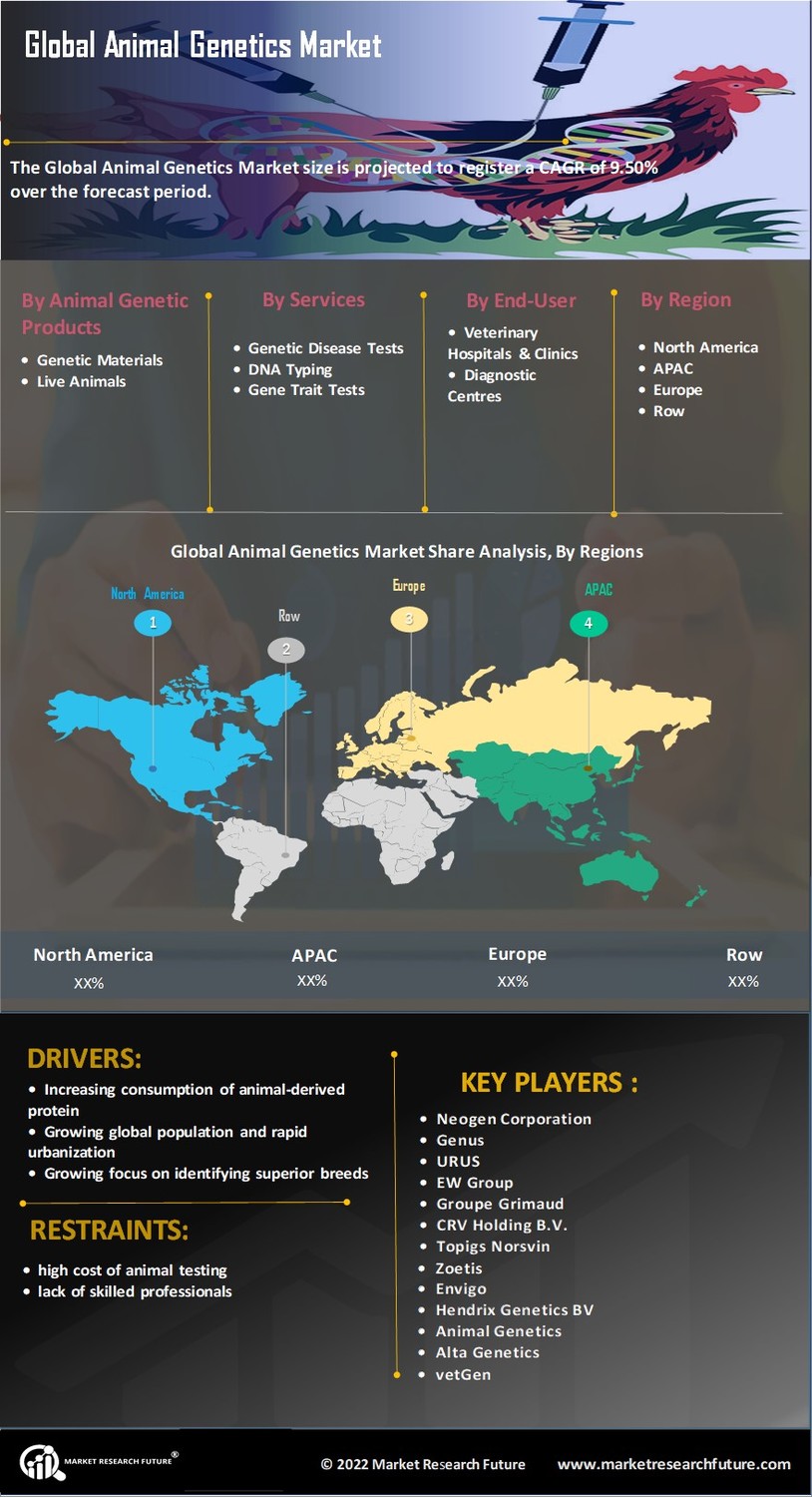 The Global Animal Genetics Market size is projected to register a CAGR of 6.90% over the forecast period 2022-2030.

Animal genetics is employed in commercial settings for services such as DNA typing, genetic disease diagnosis, and genetic characteristic testing. The genetic hybridizations are determined through hybrid population, ontogenetic, and cytological research. For example, a genetically modified cow might be able to produce more milk and be less susceptible to common cattle diseases like clostridial disease, bovine respiratory disease complex, and so on, effectively improving cattle farmers' overall profit. Animal genetics aims to produce organisms with the most desirable features. Strategic breeding can be used to choose traits in an animal that allow it to adapt to a specific condition or resist disease.

Segmentation:The Global Animal Genetics Market is segmented on the basis of animal genetic products, services, and end-user. The Animal Genetics Market, by animal genetic products, the market is segmented into genetic materials and live animals. The live animals are further bifurcated into poultry, bovine, porcine, canine and others. The genetic materials are sub-segmented into semen and embryo. On the basis of services, the animal genetics market is bifurcated into genetic disease tests, DNA typing, gene trait tests, and others. On the basis of end-user, the market is segmented into veterinary hospitals & clinics, diagnostic centres, research centres and institutes, and others. On the basis of region, the Animal Genetics Global Market is segmented into the Americas, Europe, Asia-Pacific, and the Middle East and Africa. The Americas is sub-segmented into North America and South America. The North American region is further segmented into the US and Canada. The European region is divided into two, namely, Western Europe and Eastern Europe. Western Europe is further classified into Germany, Italy, France, the UK, Spain, and the rest of Western Europe. The Asia-Pacific region is sub-segmented into Japan, China, India, Australia, the Republic of Korea, and the rest of Asia-Pacific. The Middle Eastern and African region is sub-segmented into the United Arab Emirates, Saudi Arabia, Oman, Kuwait, Qatar, and the rest of the Middle East and Africa. Regional Market SummaryThe Americas region dominated the animal genetics global market in 2017, owing to the growth in the North America region which is largely attributed to the factors such as the high demand for animal products such as pork, & mutton; further the rapid urbanization is likely to fuel the market demand for live animals in near future. The increasing adoption of artificial insemination especially in cattle, sheep, pigs, and goats fuel the further growth of the market.Europe hoisted as the second largest region for the global animal genetics market owing to increasing awareness of animal health, the rise in the number of numerous animal genetic diseases and the growing prevalence of the zoonotic disease is are expected to provide this market with lucrative growth opportunities. Asia-Pacific was projected to be the fastest growing region for the global animal genetics market in 2017. The factors attributed to the due to the growing livestock population and advancement in DNA typing and genetic testing tools further increasing the demand for genetic trait tests and various diagnostic testing. For instance, in 2018, NOVOGEN SAS launched their NOVOgen White commercial layers in Libya in a probe for regional expansion.The Middle East and Africa holds the least share in the animal genetics global market due to the presence of poor health expenditure and economically diverse countries. However, the market is expected to witness growth due to increasing toxicology care programs in the Middle East. Market Segmental Overview

Recent DevelopmentHKScan, Topigs Norsvin, and the Royal Agrifirm Group inked an agreement in March 2022 to jointly establish a research and trial farm in Finland. Cooperation will create best practices in pork production for future demands, according to the pact.The National Institute of Food and Agriculture (NIFA) invested USD 5 million in January 2022 to genetically improve livestock output in the United States.Genus ABS and The Bair Ranch worked in January 2021 to demonstrate the impact of a cow-calf management system using sex-skewed semen and terminal genetics.Intended Audience

What would be the CAGR for the animal genetics market during the forecast period of 2022 to 2030?

The animal genetics market has the opportunity to record a CAGR of 6.90% during the forecast period of 2022 to 2030.

What are the main factors impacting the animal genetics market?

What could suppress the growth rate of the animal genetics market?

The high cost of testing and rising question regarding ethical stands are going to arrest the development of the animal genetics market.

Which region would trigger maximum growth for the animal genetics market?

The Americas has the upper hand in the global animal genetics market as they have the maximum revenue-generation capacity.

What are the leading companies impacting the global animal genetics market?