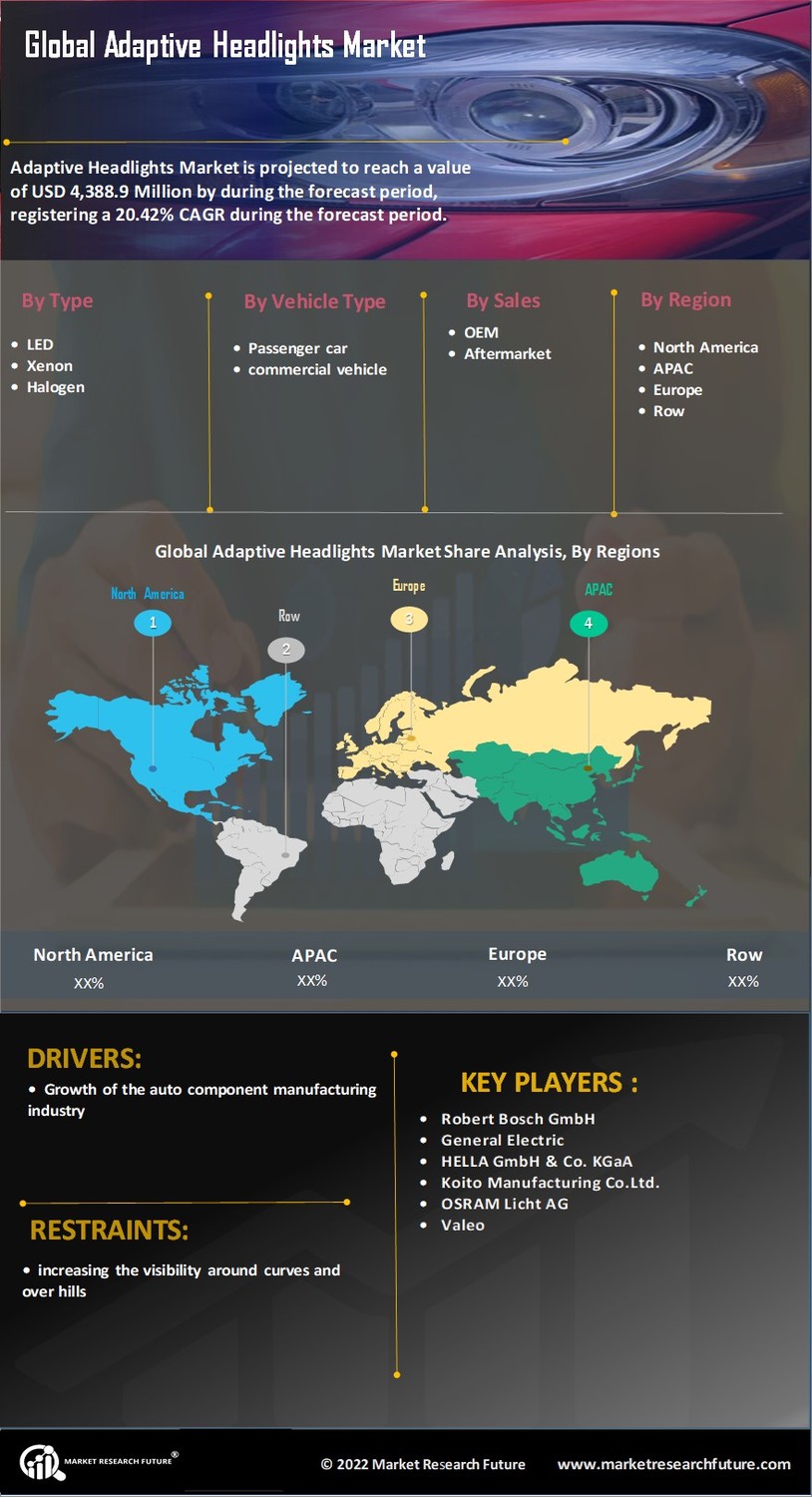 The adaptive headlight provides the optimized vision to the driver during the night and other poor-sight conditions by adapting the headlight angle and providing the required intensity of the light. Such systems emit the white or amber light in the region's countries, unlike the other countries where white is the mandated color for the automotive lighting systems.

The adaptive headlights also reduce the glare from the oncoming traffic and pedestrians. The adoption of ALS as a safety system has increased significantly across the mid-price segment in North America. The development of the projector lamp systems and the improvements in the sensor technology will drive the market's growth significantly in the region. The high fatality rate of traffic accident rates in the United States on curved and dimmed light roads coupled with the limited flexibility of the static headlight systems are some of the major drivers propelling the growth of the North American adaptive lighting system market.

The growth of the vendors is dependent on market conditions, government support, and industrial development. Thus, the vendors should focus on expanding their presence and improving their services. Robert Bosch GmbH, General Electric, HELLA GmbH & Co. KGaA, Koito Manufacturing Co., Ltd., OSRAM Licht AG, and Valeo are a few of the key players operating in the global market.

There is a controller in most adaptive front lighting systems that contains the circuits and controls all the features of the AFLS. Some of the AFLS modules use on-board diagnostics and communicate with other modules in the vehicle using the controller area network data bus. The adaptive front lighting systems module is also the primary local interface network node corresponding with the lamp units' stepper motors.

Global Market for Adaptive Headlights has been segmented based on Type, Vehicle Type, and Sales Channel.

Based on type, the global adaptive headlights market has been segmented into LED, xenon, and halogen. In 2019, the halogen segment accounted for the largest market share of 49.95%, with a market value of USD 1,049.3 million. It is projected to register a 17.64% CAGR during the projected timeframe.

Based on vehicle type, the global market has been divided into passenger car and commercial vehicle. In 2019, the passenger car segment accounted for a considerable market share of 68.00%, with a market value of USD 1,428.5 million. It is projected to register a 19.40% CAGR over the forecast period.

Based on sales channel, the global adaptive headlights market has been bifurcated into OEM and aftermarket. In 2019, the OEM segment held the larger market share of 80.58%, with a market value of USD 1,692.6 million. It is projected to register a 21.40% CAGR during the projected timeframe.

Based on region, the report on the adaptive headlights market has been segmented into Asia-Pacific, North America, Europe, and the rest of the world.The North American automotive adaptive lighting system market is consolidated and majorly dominated by a few players such as HELLA KGaA Hueck & Co., Stanley Electric., and Valeo Group. The market is highly driven by advanced technology, more use of sensors and cameras to provide the safest experience to the car owner, and major automotive adaptive lighting system manufacturers are developing the new technology for future vehicles. 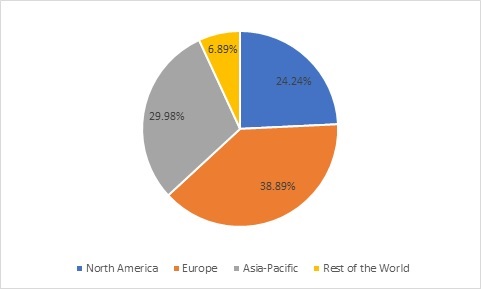 Europe comprises Germany, France, the UK, Italy, and Spain. Europe is considered as the automotive hub of the world. Major adaptive headlight players, such as Robert Bosch GmbH, HELLA GmbH & Co. KGaA, OSRAM Licht AG, and Valeo, are headquartered in this region. Additionally, the growing demand for headlights, parts, and components from premium German OEMs, such as Mercedes, Audi, and BMW, pushes global market players to enhance and develop their operation network in Europe. Germany is mainly known for its vehicle manufacturing.

The growth of the auto component manufacturing industry in Asia-Pacific is mainly driven by the growing automobile manufacturing industry, especially in countries such as China, India, and Malaysia. Due to this, the global automotive component manufacturers have established their production plants and distribution networks in Asia-Pacific. The market has been experiencing rapid growth in the last two years due to the increasing usage of lighting on vehicles, increasing popularity of LED lights, and technological advancements, giving a much-needed thrust to the adaptive headlights market.

Global Market for adaptive headlights has been segmented based on type, vehicle type, and sales channel. Laser lighting as one of the future headlamp solutions is one of the most promising breakthroughs in automotive lighting market and the next major move after halogen, xenon, and LED headlight technologies. The advantage of laser lights is that their brightness is almost four times that of an LED. Lasers use less electricity compared to older light forms, saving battery power. Moreover, these headlights will have the longest range provided by any current headlight technology. This offers the driver improved visibility, resulting in increased road traffic safety. Some of the major car manufacturers have started incorporating laser technology in their vehicles.


Key Questions Addressed by the Report

What growth rate is expected to be achieved by the global market in the forthcoming years?

The market has the potential to achieve a CAGR of 20.42% in the forthcoming years.

Which companies have been recognized to be the leaders in the global market?

What is expected to be the market size by 2026?

Which factors benefit the worldwide market?

The automotive adaptive headlights market is mostly benefitted from factors like changing government regulations coupled with the end user’s demand for of improved safety in automobiles.

What factors create lucrative opportunities in the global market?

Considerable surge in the demand for environment friendly vehicles, penetration of global auto-manufacturers into the emerging markets along with the rising adoption of advanced technology in vehicles are expected to create lucrative opportunities in the global market.

Adaptive Headlights Market is Estimated to Reach a Value of USD 4,388.9 Million by 2026, Register...