Acute Pancreatitis Market: Information by Cause (Gallstones, Alcohol and Other Causes), by Treatment & Diagnosis (Treatment [Intravenous Fluid, Analgesics, Nutritional Support, Endoscopic Retrograde Cholangiopancreatography (ERCP) and Others] and Diagnosis[Imaging Tests, Laboratory Tests]), By End User (Hospitals & Clinics and Others) and by Region (Americas, Europe, Asia-Pacific, and the Middle East & Africa) - Forecast till 2027 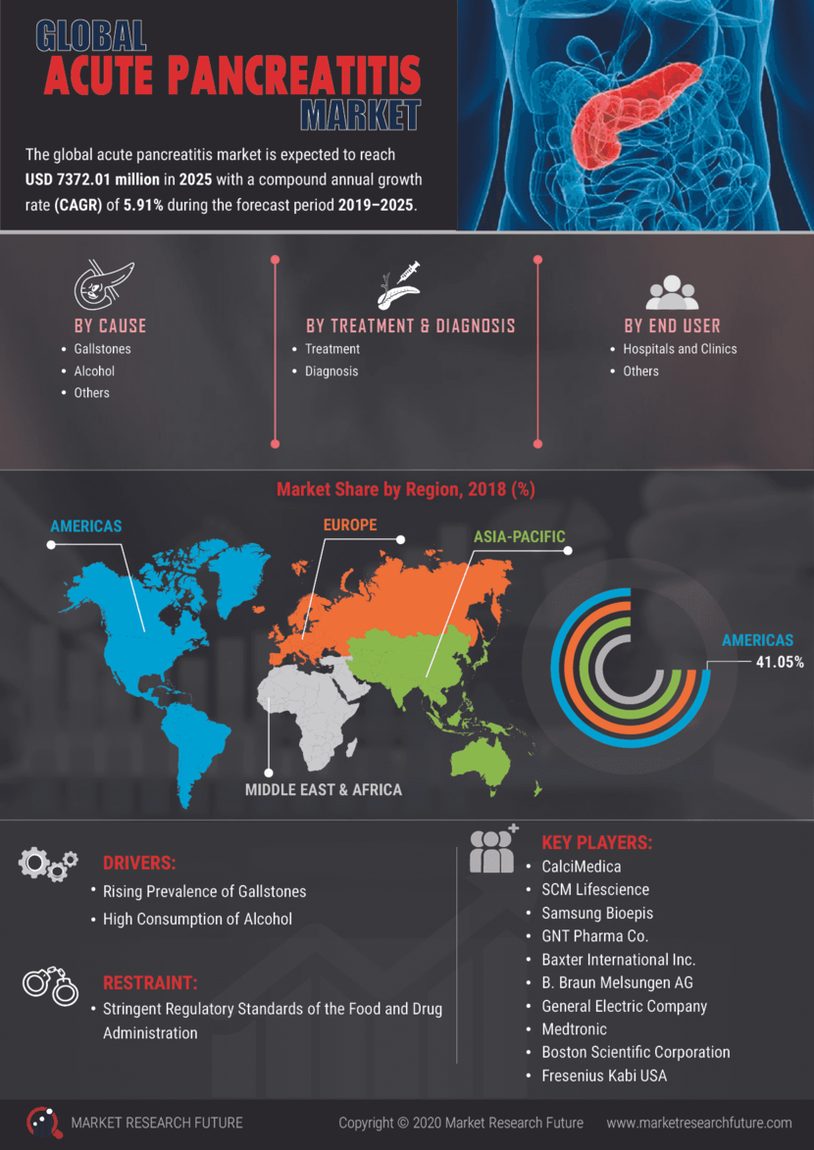 The growth of the Market is attributed to rising prevalence of gallstones and high consumption of alcohol.

However, stringent regulations imposed by the FDA (Food and Drug Administration) is expected to hamper the growth of the market.

The players operating in the acute pancreatitis market are focusing on product launches, along with expanding their global footprints by entering untapped markets.

The Acute Pancreatitis Market has been segmented into Cause, Treatment & Diagnosis, and End User.

On the cause, the market has been segmented into gallstones, alcohol, and others. Gallstones accounts for 49.52% of the market share in this segment. Rising cases of gall stones worldwide and growing older population along with hereditary predispositions are major risk factors causing gall stones, which is driving the growth of the market.

Based on end user, the market has been classified as hospitals & clinics and others.

The Acute Pancreatitis is broadly segmented based on region into the Americas, Europe, Asia-Pacific, and the Middle East & Africa.

The Americas accounted for a market share of 41.05% in 2018 due to the increasing prevalence of gall stones and alcohol consumption among the population and the availability of advanced healthcare facilities in the region. According to the National Institute of Diabetes and Digestive and Kidney Diseases, gallstones are very common, affecting 10% to 15% of the US population, which is nearly 25 million people. The acute pancreatitis in the Americas has been segmented into North America and Latin America, with the North America market further divided into the US and Canada.

The Asia-Pacific has been segmented into China, India, Japan, South Korea, Australia, and the rest of Asia-Pacific. It holds the third-largest position in the acute pancreatitis market.

Acute Pancreatitis Market, By Cause

At what CAGR is the Global Acute Pancreatitis Market projected to grow in the forecast period (2019-2025)?

Acute Pancreatitis Market is projected to grow at approximately 5.91% CAGR during the assessment period (2019-2025).

How much is the Global Acute Pancreatitis Market worth in the future?

Acute Pancreatitis Market is estimated to reach a valuation of approx. USD 7372.01 MN by the end of 2025.

What are the major tailwinds pushing the growth of the Global Acute Pancreatitis Market?

Rising prevalence of gallstones, high consumption of alcohol, and increasing investments and advancements in treatment procedures, are major tailwinds pushing the growth of the Global Acute Pancreatitis Market.

Which region holds the largest share in the Global Acute Pancreatitis Market?

North America holds the largest share in the Global Acute Pancreatitis Market, followed by Europe and the Asia Pacific, respectively.

Who are the top players in the Global Acute Pancreatitis Market?

The Rising Prevalence Of Gallstones And High Consumption Of Alcohol Is Expected To Propel The Gro...