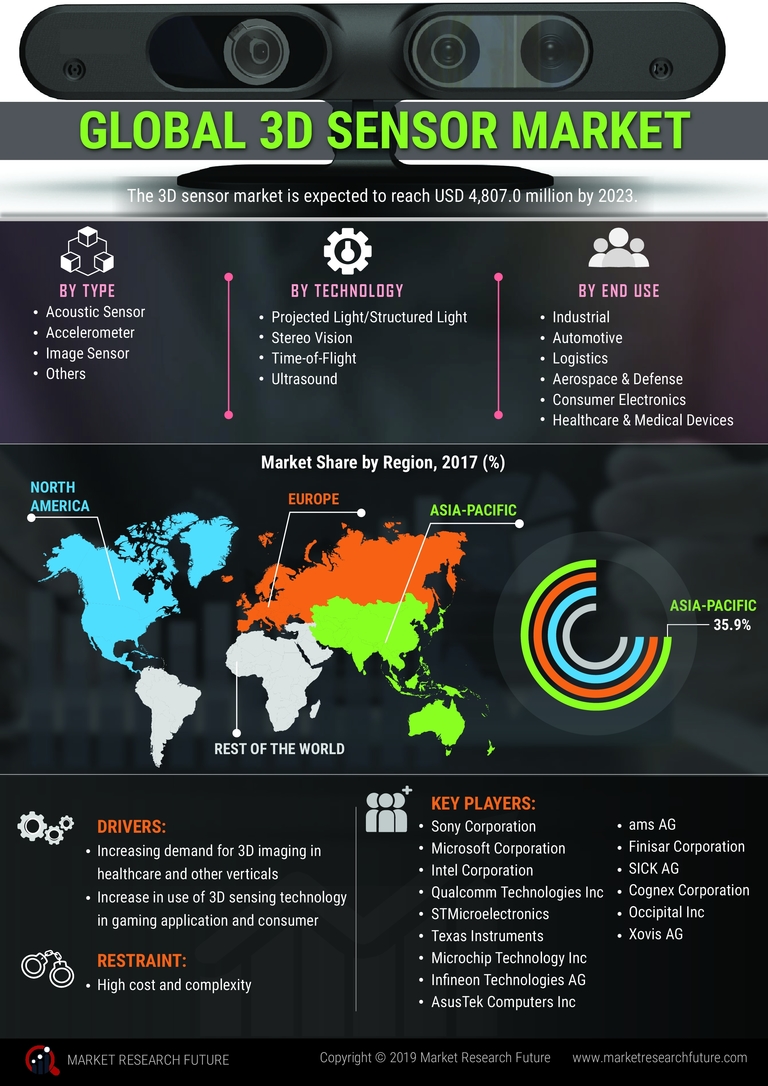 3D sensors are increasingly being adopted in consumer electronics, industrial manufacturing for precision manufacturing and in the medical device manufacturing industry. The factors contributing to the 3D sensor market growth include the increased demand for 3D sensors in imaging applications across different industry verticals, rising use of 3D sensing technology in virtual reality, and gaming, need for high precision security and surveillance, and increasing demand for 3D enabled devices in consumer electronics such as smartphones, and tablets. The 3D sensors are also used by artists, engineers, and architects for designing a 3D model based out of 2D data. Moreover, in recent years, the 3D sensors are implemented for 3D sensing for automotive control functions & logistics. Although various vital players are continually investing in research & development of 3D sensing, the increased demand for 3D sensors in mixed reality, and depth-sensing technology is creating an opportunity for 3D sensors.

In recent years, the 3D sensors have gained popularity due to its ability to detect the size, shape, and distance of an object or objects within its field of vision. Such sensors use a variety of techniques to recognize the objects in space. They have applications in 3D printing, object recognition, design, gesture-based control, mapping, facial recognition, and other industrial or commercial applications. Moreover, in robotics, 3D image sensors help in collision avoidance and solving assembling problems. In virtual and augmented reality, 3D sensors are used for teleconferencing, while it enables marketing teams to showcase property for sale to potential clients remotely. They also have applications in the automotive sector. These sensors, when deployed in a detecting device, help detect the driver’s movements and warns if they seem to be sleeping while on the road.

Gaming has gained immense popularity in recent times with the advent of virtual reality and augmented reality. The 3D sensor-based gaming is rapidly increasing in the PC and console gaming communities. With the Xbox Kinect, 3D sensors have become more popular as they detect movements by players and incorporate them in the game. The new generation of gaming hardware comprises high-end computer systems with dual-core processors. The rise of gaming and augmented reality are the major factors driving the growth of the global 3D sensors market.

Similarly, the rising demand for enhanced visual effects has led to the introduction of various 3D-enabled devices in the consumer electronics market such as cameras, 3D media players, 3D gaming consoles, 3D portable devices, 3D TV displays, 3D desktop PCs, and notebooks. The availability of 3D content is increasing in step with the rising demand for 3D-enabled devices, thereby driving market growth. To this end, Apple Inc. is planning to strengthen its partnership with Sony Corporation for 3D sensors supply. Additionally, the growing need for security and surveillance is also contributing to 3D sensor market growth as 3D sensors are widely used in cameras.

3D sensing can be achieved by implementing various technologies. It is widely used in the consumer lifestyle, automotive, security, and industrial sectors. Eye tracking, gesture recognition, 3D video conferencing, facial recognition, distracted driver detection, touchless dashboard control, vehicle access control, security scanning, object detection, collision warning, content generation for 3D printing are devices equipped with 3D sensors. The 3D sensors are the devices which respond to the external environment in three dimensions by producing 3D maps of the user’s surroundings. The 3D sensor is a combination of different sensing elements such as structured light technologies, ultrasound, and time of flight (ToF). The rise in demand for smartphones, the requirement for improving electronic devices, and increasing need for gesture analysis applications drive the growth of the 3D sensor market during the forecast period. However, the high cost and the technical complexities restrain the 3D sensor market during the forecasted period. STMicroelectronics, Texas semiconductor Incorporated, Qualcomm Technologies, Infineon Technologies AG, and Intel Corporation is expected to dominate the 3D sensor market during the forecast period.

What is expected to be the valuation of the 3D sensor market by 2030?

Mention some of the key participants of the market assessed in the share analysis?

What are the segments of the 3D sensor market, based on type, profiled in this report?

By type, the segments of the 3d sensor market identified are acoustic sensor, image sensor, accelerometer, and others.

How is the gaming industry supposed to benefit from 3D sensors?

The developments of 3D sensors is likely to gain traction of the gaming industry due to its use in augmented reality and virtual reality games.

What are the end-user segments of the 3D sensor market?

How is the use of 3D sensors in consumer electronics industry expected to contribute to market growth?

The rising application of the sensing technology in smartphones and tablets is supposed to contribute to 3D sensor market development in the nearby future.

Mention one driver of the market for 3D sensor

Increasing use in security and surveillance is expected to drive 3d sensor market growth in the coming years.

Global 3D sensors market is estimated to grow at a CAGR of 22.2% over the forecast period