Solar Powered UAV Market is predicted to grow at approximately 14.80% CAGR by 2023 :

Unmanned Aerial Vehicles (UAVs) or drones are autonomous aircraft that are remotely controlled from the ground or through onboard computers. Standard UAVs are accessible in numerous sizes. Whereas the large-sized ones, which are utilized for tactical missions, are powered by internal combustion engines, smaller ones are chiefly battery-powered by electric motors. However, since the last decade, the arrival of latest technologies has led to the advent of battery-powered UAVs by photovoltaic cells, hydrogen fuel cells, and hybrid-electric propulsion engines. Solar-powered UAV platforms use photovoltaic panels to soak up energy from the sun and convert it into electricity to thrust their engines.

Based on region, the global solar-powered UAV market gets fragmented into North America, Asia Pacific, Europe, Middle East & Africa, and Latin America. In the U.S., solar-powered UAVs are in majorly used for military functions. Besides, major nations in North America, such as Canada, Mexico, and Brazil, are increasing their solar-powered UAV investments. The U.S. has been dominating this market, owing to the high investments by the National Aeronautics and Space Administration (NASA), along with the Department of Defense (DoD).

The use of Proton Exchange Membrane (PEM) fuel cell system in the solar-powered UAV enables it with an uninterrupted flight capability, for over six months. The Helios prototype was one amongst the earliest solar-powered UAVs (developed by AeroVironment in 1999) that used PEM-based fuel system, with funding from the NASA. Similarly, in 2015, it was reported that Facebook completed the prototyping of Aquila, a solar-powered UAV, which can fly over 11 miles above ground level and provide internet connectivity to regions that lack satellite-based networks.

Although, there have been demonstration flights using solar energy, the concept of solar-powered UAV would require high R&D investments and a large number of solar panels or cells to fly for longer durations. Therefore, it is expected that the market would attract high investments during the forecast period. 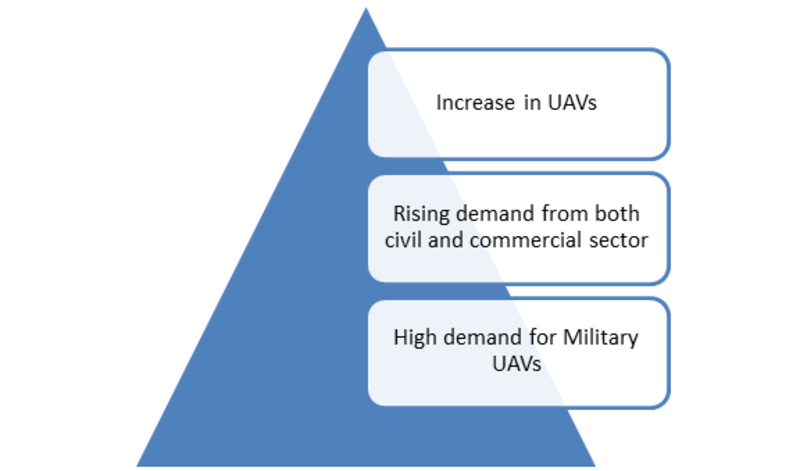 This study provides an overview of the global solar powered UAV market, tracking three market segments across four geographic regions. The report studies key players, providing a five-year annual trend analysis that highlights market size, volume and share for North America, Europe, Asia Pacific (APAC) and Rest of the World (ROW). The report also provides a forecast, focusing on the market opportunities for the next five years for each region. The scope of the study segments the global Solar Powered UAVs market by its application, type, and region.