UK Markets Respond As The Next PM, Rishi Sunak, Prepares To Take Office

The markets are responding to the news of Rishi Sunak being the next prime minister of the UK after Liz Truss' 44 historic days in office. The markets have already stabilized on the belief that Sunak might be able to repair the UK's finances.

Mr. Johnson, who only recently resigned as prime minister, asserted that he had enough support to run but conceded that this was "not the right time." Sunak will take office at a time when Ex-PM Liz Truss' mini budget exacerbated an economic crisis and put pressure on public finances. Truss tweeted to congratulate him and offer her "full support" post the announcement.

His rival Penny Mordaunt withdrew after her inability to garner enough support from MPs. In his opening remarks, Mr. Sunak declared that uniting his party and the UK would be his "utmost priority." He is the first British Asian prime minister in more than 200 years and, at 42, also the youngest.

Prior to the announcement, the pound rose to $1.13 on Monday morning after Boris Johnson withdrew from the leadership race. The FTSE 100 also started the day higher by 0.5%, crossing the 7,000-point threshold for the first time in a week. Investors are now factoring in a slightly less hawkish hike from the Bank of England, just around 5%, which is lower than the 6% projected in the wake of the Government's dismal mini-budget. Ultimately, this can also result in lower monthly mortgage payments for homeowners.

Since the Conservatives won the most recent general election in 2019, Sunak will be the third prime minister to lead the party, leading to calls for an early election from Labour. 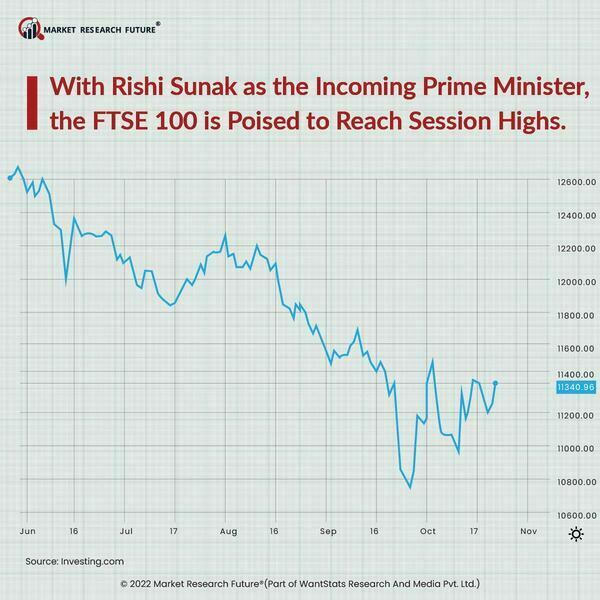 UK Markets Respond As The Next PM, Rishi Sunak, Prepares To Take Office