The Soaring Dollar is Causing the World's Currencies to Fall

With interest rates peaking globally, inflation is still present, as many currencies continue to depreciate against the dollar. The consensus among experts is that a worldwide recession is approaching. Amid its dim economic picture, the United States is still anticipated to grow more quickly than its affluent counterparts. High-interest rates make American assets more appealing to foreign investors.

In many other parts of the world, governments and financial institutions must deal with two problems: slow economic development and rising inflation. To treat the latter, central banks are purposefully sacrificing the former by employing the available tool of interest rate hikes. Europe is battling with high energy costs hindering its economic growth, while the developing world is grappling with mounting debts. In a recent announcement, the World Bank president warned that Global growth is slowing dramatically.

The euro depreciated below the dollar this summer for the first time in more than 20 years, while the British pound sank as low as $1.03 this week. The nation's new administration has pledged to slash taxes and control consumer energy costs, increasing the deficit. The Global markets have resisted funding it, resulting in higher interest rates and a significantly depreciated pound.

However, poorer nations are the ones who are under the most burden. Since the start of the epidemic, developing countries have had to deal with growing costs for necessities like oil, gas, and fertilizer. As the dollar's value rises, the prices of commodities like oil increase significantly. Sri Lanka's government was ousted this summer after it became almost impossible for the country to import petroleum.

According to a recent World Bank assessment, the current state of the world is like previous times when there have been global downturns. The research states that these developments do not point toward a possibility that a worldwide recession will be avoided as there has been a significant weakening in global growth the year before every global recession since 1970, all of which have coincided with a recession in the US.

Even nations without the threat of unpayable dollar debts may experience consequences from a strengthening dollar. For the first time since the 1990s, Japan's central bank was compelled to purchase the yen to keep the yen's value stable. Despite the Fed and other wealthy central banks raising interest rates, Japan has maintained its low-interest rate policy, which has caused the yen's value to decline against the dollar.

Following a 2020 debt default on a portion of its debt, Zambia recently agreed to a bailout from the International Monetary Fund. The 2020 economic crisis in southern Africa was exacerbated by the rise in fertilizer costs that followed Russia's invasion of Ukraine. Developing nations cannot borrow their currencies at the levels or for the terms they desire. Lenders do not want to take the chance of receiving repayment in the weak currencies of these debtors. Instead, these nations typically promise to repay their obligations in dollars, regardless of the exchange rate, when they borrow money. As a result, these repayments become significantly more expensive in the native currency as the dollar gains strength vis a vis other currencies. 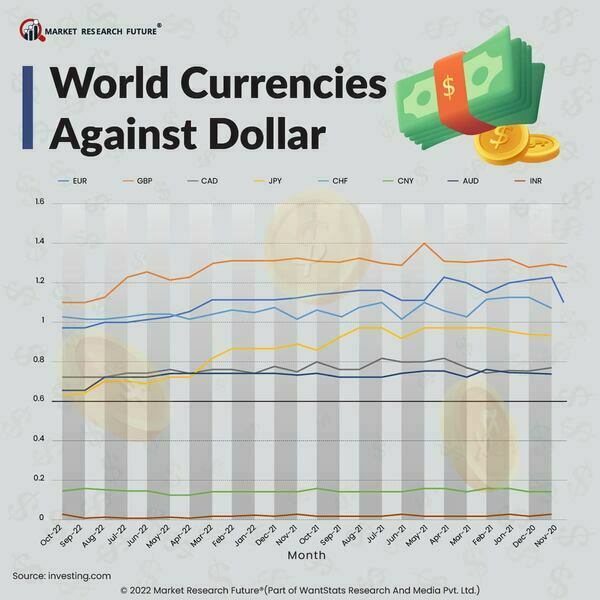 The Soaring Dollar is Causing the World's Currencies to Fall