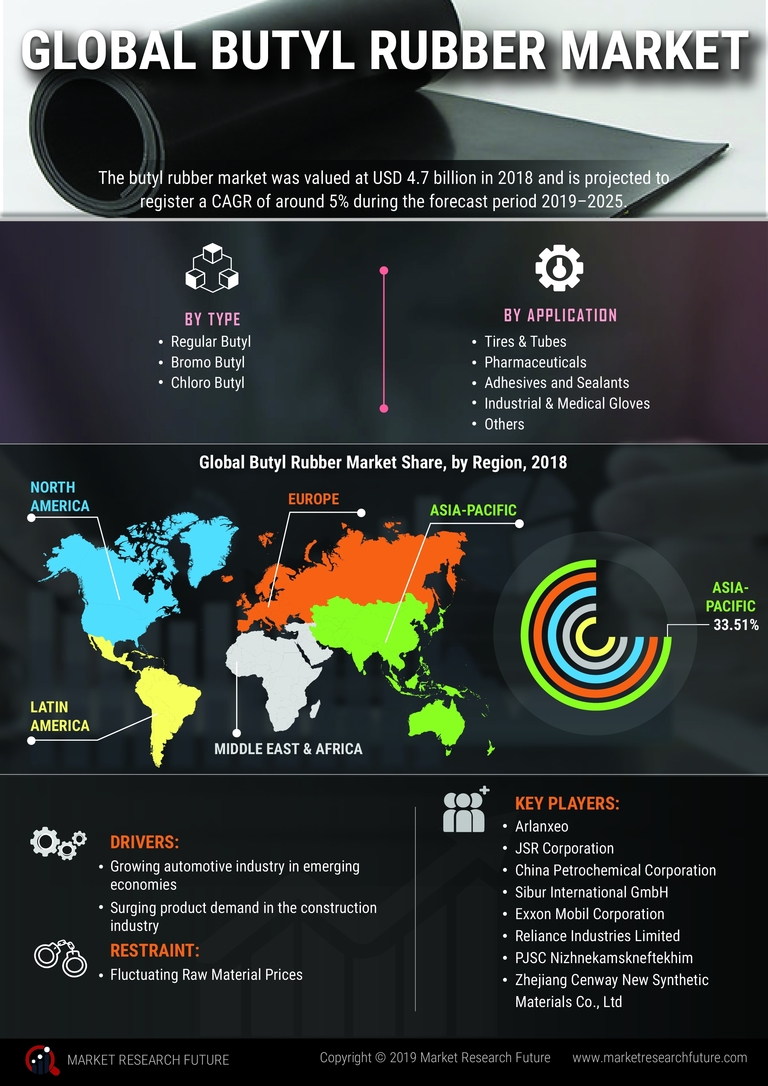 Although the COVID-19 pandemic aims to transform the development of multiple sectors, the outbreak's immediate effect is varied. Although a few sectors will report a reduction in demand, many others will continue to stay unscathed and present exciting growth prospects. The prospect for global vehicle sales for 2020 is getting more complicated in the COVID-19 sense. The butyl rubber sector has recently been impacted by the COVID-19 pandemic, where much of the manufacturing production has been shut down temporarily. In effect, the market and supply chain have also been affected, limiting growth.

Growing Adoption from the Automotive Sector to Fuel Market Growth

The rising demand for vehicle tyres and tubing is favourably mirrored in the global market for butyl rubber. Growing demand for OEM tyres is projected to expand market growth over the coming years due to the increasing automotive industry. Demand for raw materials, including butyl rubber, has risen dramatically with the continuing growth of the automotive industry in developing economies. In countries such as China, Mexico, and India, sales of passenger and commercial vehicles are spiralling due to increased buying power in these countries. In these countries, the emergence of an existing tire-recycling industry also provides an incentive for marketing. In the coming years, the increasing demand for butyl rubber for damp proofing and roof repair is expected to fuel this market's growth. In addition, demand is expected to be propelled by the use of food-grade butyl rubber in food applications.

In addition, as part of corporate social responsibility, industry players are seeking to find new ways to reduce/mitigate the ecological harm caused by butyl rubber production and this is expected to encourage market growth patterns in the near future.

Factors such as fluctuating raw material costs, volatile organic compound (VOC) pollution regulations due to rubber processing and the availability of alternatives are, however, likely to threaten the development of the industry in the future. The price volatility of raw materials and government policies impacting the price of butyl rubber are threatening the butyl rubber industry. The rubber content was improved by the anti-dumping duty levy on carbon black rubber goods. It is difficult to treat butyl rubber during processing, owing to its ability to catch air and creep. Environmental concerns are another challenge for the industry, so exposure to contaminants in the manufacture of rubber remains a big health problem. It has poor tolerance to aliphatic sugars, and aromatic hydrocarbons.

The segmental analysis of the Butyl Rubber Market is based on Type and Application.

On the basis of type, the market has been segmented into bromobutyl, intoregular butyl, and chlorobutyl. The class of bromobutyl accounted for a comparatively greater market share in 2017. During the forecast period, the segment is expected to experience a CAGR of 5.21 percent and surpass a USD 2.2 billion market valuation. The growing use of bromo butyl in large-scale industries such as the automotive and pharmaceutical industries can be due to this.

The industry has been segmented into tyres and tubing, adhesives and sealants, industrial and medical gloves, pharmaceuticals, and others, based on application. The highest market share is actually in the hands of tyres and tubes and the trend is expected to persist during the measurement period. The segment is expected to reach a value of USD 4 billion by the end of 2023. The growth of the segment is supported by the growing development of automobiles coupled with the expansion of the aerospace industry. Currently, the market for butyl rubber is concentrated in the supply field of tyres and tubing. During the prediction era, the tyres and tubes segment is projected to remain incredibly lucrative.

Four main areas, including the Asia Pacific, North America, Europe, and the rest of the world, have been given a geographical description of the global economy.

The highest market share is accounted for by Asia-Pacific (APAC). The industry in the region stood at over USD 1.5 billion in 2017. During the prognosis period, the region is expected to remain highly lucrative for butyl rubber. Rapid industrial development is one of the key factors driving the growth of the region's economy. In terms of automobile production, China leads globally, which is substantially positive for the country's Butyl Rubber Industry. Moreover, in countries such as India and China, the increasing demand for passenger and commercial vehicles is also giving impetus to the Butyl Rubber Market in the region. The continued growth of APAC industries such as automobile, aerospace, pharmaceuticals and construction is growing its position as a significant business destination for industry players.

One of the main markets for butyl rubber has been North America. The new U.S. reforms have accelerated industrialization rate across the country, which over the projected horizon is expected to provide a favourable scope for business growth. As of 2016, the U.S. accounted for the highest market share in North America. It is anticipated that the presence of various hospitals, medical institutions, and clinics combined with customer healthcare awareness would boost the market for goods in the application of medical gloves. Industries like pharmaceuticals, manufacturing, and automobile have been greatly impacted by tight government restrictions combined with an economic downturn. The area's growth rate is projected to be poor relative to Asia Pacific and North America because of a downturn in the application industry.

The Butyl Rubber Industry has now been a very competitive industry, and this aspect is helpful to the studied market as businesses obtain opportunities to expand their presence. Furthermore, major industry players are focused on expanding their geographic footprint. In order to build a standout image in the global market, all of these market leaders are aggressively focused on product creativity. At the same time, by participating in strategic growth operations, focus is placed on capturing untapped markets. These industry players are introducing different tactics such as growth, supply deals, and product releases to achieve full sales.


July 2021 MRF, the world's largest tyre manufacturer, has stated that it is considering creating raw materials in collaboration with domestic players to reduce reliance on imports. As part of the import replacement program, the company collaborates with domestic sources to develop raw materials such as sulfur, butyl rubber, microcrystalline wax, and tackifier resin. On the forecast, the business stated that MRF's major markets of West Asia and Africa and the Philippines, Indonesia, and Bangladesh continued to enjoy continuous demand for its products across all categories. Call for tyres in the truck, radial light truck, and motorbike categories grew further, reflecting the company's considerable brand equity in these markets

May 2021 Local voters have granted their approval for PJSC Nizhnekamskneftekhim (NKNH) to proceed with a technical re-equipment. On April 30, the business held a public hearing to examine the project's dimensions and environmental impact assessment. NKNH will reduce butyl rubber production at its production site and convert a 50 kilotonne per annum capacity to halobutyl rubber, a major raw material for tyre manufacturing, as part of the technical improvement. The company's decision is in response to the rising demand for ecologically friendly and cost-effective tubeless tyres. The project, which is planned to be finished in July 2022, will replace obsolete butyl rubber production equipment with new, high-tech, and environmentally friendly equipment.

November 2020: The ExxonMobil-operated, 110,000-metric tons/year butyl rubber plant at Fawley in the south of the UK was set for a full-scale turnaround in 2022.  ExxonMobil also commenced a planned shutdown at its cracker in Singapore by halting operations at the cracker for maintenance.

How big is the butyl rubber market expected to turn out by 2023?

At what CAGR, the global butyl rubber market would register its growth between 2018 and 2023, the forecast period?

Which industry would impact the maximum growth for the butyl rubber market?

The increasing demand for automotive components like tires and tubes would ensure growth for the butyl rubber segment.

Which type-base segment would hold the reins of the butyl rubber market?

The bromobutyl segment would have the reins of the butyl rubber market.

Which application-based segment has the scope to dominate the butyl rubber market?

The tires and tubes segment would dominate the global butyl rubber market.

Exxon Mobil Corporation, Reliance Industries Limited, Sibur International GmbH, Arlanxeo, and JSR Corporation are the manufacturing companies which collectively account for the majority share of the butyl rubber market. The market is fragmented and comprises of players which are operational in China, Japan, India, the Netherlands, Austria, and the US. Different strategies such as expansion, supply agreements, and product launches are implemented by these market players to gain maximum revenue. There is a growing demand from various end-use applications such as tires & tubes adhesives & sealants, industrial & medical gloves, and pharmaceuticals which attributes to the growth of the market. There is a strong competition between companies as there is a surging demand for butyl rubber in growing automotive industry.

In August 2018, Lanxess AG announced plans to sell 50% of its stake in Arlanxeo to its joint venture partner Saudi Arabian Oil Co. The total joint venture was valued at USD 3.55 billion. LANXESS expects to receive approximately USD 1.65 billion in cash after deducting debt and other financial liabilities for its 50% stake.

In December 2017, PJSC Nizhnekamskneftekhim and Pirelli, the global manufacturer of automotive tires, entered into a cooperation agreement to produce synthetic rubber. With this, both parties agreed to strengthen their business relations in the future. In June 2017, PJSC Nizhnekamskneftekhim and Michelin, the French tire manufacturer, signed a supply agreement to develop and supply new brands of synthetic rubber.

In June 2018, Exxon Mobil has begun production at its newly constructed halobutyl rubber plant in Singapore. This new integrated facility has added 140,000 metric tons of butyl rubber capacity to the company’s overall production.

JSR is focused on strengthening its competitiveness with the launch of JSR20i9, a new medium-term business plan, in April 2017. To achieve JSR20i9, the company is expanding its three business segments.