Online video streaming has been gaining importance in the recent past since it provides personalized video content that can be accessed anytime anywhere. The online video streaming market is largely comprised of large multi-national players such as Netflix, Amazon Prime Video, Disney+, Hulu, HBO, Apple TV+, and YouTube, among others.

Since the global lockdown in early March following the outbreak of COVID-19, governments across the world have undertaken measures to prevent and minimize the spread of the coronavirus by closing down all the administrative, manufacturing, and corporate operations in the developed as well as developing economies. The employees have been asked to either work from their homes or provided have been provided with paid leaves. Furthermore, all other business operations, schools, colleges, universities, etc. are closed, leading to the majority of the population to stay within their homes. This, in turn, has resulted in the population opting for the Internet and other online platforms for entertainment.

The number of Netflix subscribers increased by about 16 million during this pandemic, reaching around 182.9 million subscribers in total, which took Netflix 7 years to reach this milestone. Disney+, newly launched last month, gained a subscriber base of around 50 million during this outbreak in the UK and other western European countries. Disney+ has reached a total subscriber base of 28.6 million. Also, its partnership with the Hotstar streaming service added 8 million new users to its subscriber base. The outbreak has proven to be a boon for all streaming service providers. Overall, the global streaming industry is expected to grow by almost 20% year on year.

In terms of revenue generation, Netflix raised around USD 709 million during the first three months of 2020 and is expected to grow further with a minimal impact by the outbreak. The content producers are now directly releasing their content over these platforms and are proving to be beneficial in terms of revenue generation. According to the letter shared with its shareholders, Netflix noted that some of the lockdown growth will turn out to be pulling forward from the multi-year organic growth trend, leading to slower growth after the end of the lockdown, globally.

To conclude, in the near future, the growth of the video streaming market is expected to depend upon the users’ time spent over the internet, as well as on the spending power of the consumers. 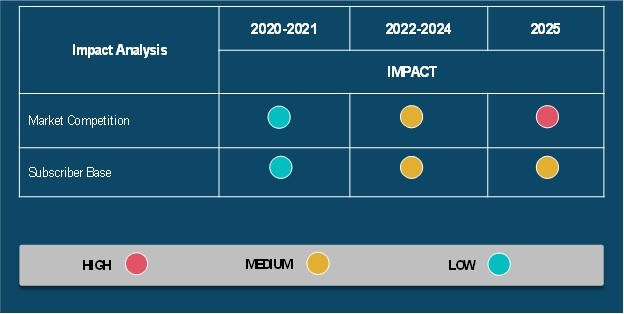