Impact of COVID-19 on the Silicon Photonics Market

The silicon photonics market has witnessed a dual impact in recent months owing to the lockdowns imposed globally to curb the spread of COVID-19. Silicon photonics is a mushrooming technology in which data is transferred between different computer chips using light rays. This technology is gaining traction owing to its property of carrying high volumes of data in less time as compared to that of conventional copper electrical conductors. Also, to cope with the limited use of copper in networking and storage area networks (SANs), optical fibers are actively used in silicon photonics to establish fast interconnections between data centers. The silicon photonics technology is operated with the support of semiconductor fabrication techniques. Silicon photonics consists of nanophotonic components such as ring resonators and filters. The use of photonics in the semiconductor industry aids in establishing low-cost, high-volume assemblies that support transmissions of up to 100 gigabits per second between chips. The demand for silicon photonics has reduced significantly, owing to the majority of countries imposing partial or complete lockdowns in recent months, which has halted the production of all non-essential services. However, the silicon photonics market is anticipated to recover, and the product demand is expected to rise in the coming months.

Silicon photonics is utilized largely by the IT & telecommunication industry, which has also witnessed a dual impact due to the COVID-19 outbreak. Telecommunications and some sectors of the Information Technology industry were included in the essential services lists released by various governments. The product demand from these sectors, along with constant innovation, has driven the market in recent months. This product demand is anticipated to grow in the coming months as several countries prepare to lift the lockdowns in a phased manner. Furthermore, the demand for healthcare products has surged in recent months owing to the increasing consumer focus towards health and undertaking precautionary steps recommended by the governments. The demand for silicon photonics to establish optical communications and long-range telecommunications and produce optical routers and signal processors for the healthcare industry has sustained smooth operations. In February 2020, Tata Consultancy Services (TCS) won a contract worth USD 1.5 billion from Walgreens Boots Alliance, a pharma company. Thus, the demand for silicon photonics is anticipated to witness an upsurge in the next five years. 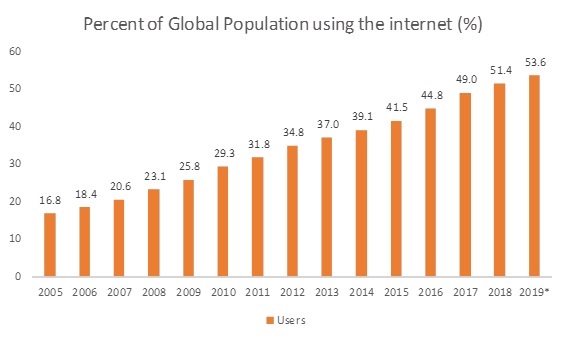 Note: * is an ITU Estimate